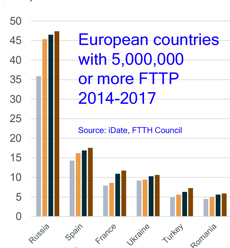 I didn't believe it until I double-checked the figures. Telefonica Spain added 500,000 homes passed by fibre to the home in Q1 2018 to reach 19.7M. Three months later, they are almost certainly over 20M, over 75% of Spain. They are now making more money per customer (EBITDA,) seeing less churn, and reducing operating expenses on the new network. The financial results were so favorable the Brazilian subsidiary, VIVO, is also adding 7M. VIVO's total will be 14M by 2020.

Across Europe, iDate and the Fibre to the Home Council calculate FTTB/FTTH rose by 20% in 2017. British Telecom and Deutsche have fone very little do far but have planned over 20M lines starting in 2019. Below, the iDate/FTTH charts for all of Europe. The trend is obvious.

I'm working on a full report, Fibre is Back, and am astounded by the explosive growth.  AT&T is continuing at 3M/year, with no signs of stopping. France in the next four years expects to go from 40% coverage to over 70%. Costs are down and returns have been confirmed. I'm looking at other reasons for the surprising growth and would be delighted to do a call and share ideas.

China now has over 300M homes connected directly to fibre, more than twice as many as the rest of the world. Shanghai has better than 99% FTTH coverage, twice as high as most U.S. cities.

These charts are from Roland Montague, one of the world's most respected fibre analysts. I've researched some of the primary sources and can confirm the general accuracy. This data is FTTP, fibre to the premises. That includes fibre to the basement and then copper to the apartment. With G.fast, basement DSLAMs can now deliver a symmetric gigabit, which is reasonably comparable. That's why Russia and Eastern Europe rank so high, Most Russians live in apartment buildings served by basement fibre.

Montague's FTTH/B Panorama Is loaded with data and free from the FTTH Council.