Half of Europe fibered

Much of Europe has a 40% take rate, far more than even most industry pros realize. (Larger chart & pr below.) iDate, working for the Fibre to the Home Council Europe, finds 183 million homes passed. Subscribers are growing at 17% per year.

France and Spain are the standouts among large countries. France has covered 2/3rds of the nation. Italy, Germany, and the UK are far behind, but that;s changing.

Russia was long the leader because many buildings have fiber to the basement. 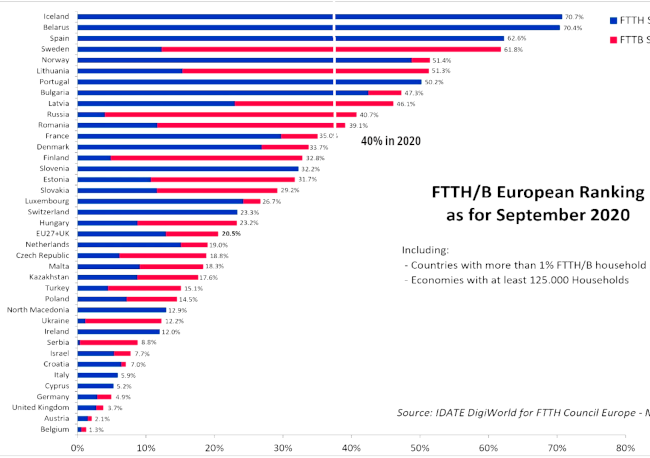 • Number of homes passed by fibre (FTTH/B) reaches nearly 183 million homes in EU39;
• France, Italy, Germany and the UK have the biggest increase in Europe in number of homes
passed;
• Three countries are accounting for almost 60% of homes left to be passed with fibre in the
EU27+UK region;
• FTTH/B Coverage in Europe surpasses more than half of total homes;
• 16.6% growth in the number of fibre subscribers;
• Iceland leads the European FTTH/B league table second year in a row;
• Belgium, Israel, Malta and Cyprus enter the FTTH/B ranking for the first time.
Brussels, 12 May 2021 – Today the FTTH Council Europe revealed the 2021 Market Panorama and the
latest figures outlining fibre deployment trends in Europe prepared by IDATE.
Market Panorama & key findings:
The total number of homes passed with Fibre to the Home (FTTH) and Fibre to the Building (FTTB)
in the EU391 reached nearly 182.6 million homes in September 2020, compared to 172 million in
September 2019. The main movers in terms of homes passed in absolute numbers are France (+4,6
M), Italy (+2,8 M), Germany (+2,7 M) and the UK (+1,7 M). The top 5 of the annual growth rates in
terms of homes passed is headed by Belgium (+155%), Serbia (+110%), Germany (+66%), United
Kingdom (+65%) and Ireland (+49%).
This year2
, a key milestone has been reached, as FTTH/B Coverage in EU39 now amounts to more
than half of total homes. By September 2020, EU39 reached a 52.5% coverage of FTTH/B networks
while EU27+UK 3 sits at 43.8%, compared to respectively 49.9% and 39.4% in 2019. This shows a clear
upward trend from the September 2015 figures when the coverage was at 39.8% in EU39 and 27.2%
in EU27+UK.
The number of FTTH and FTTB subscribers in Europe increased by 16.6% in EU39 in the year since
September 2019 with 81.9 million FTTH/B subscribers in September 2020. Russia still plays a major
role in this increase, however, it is interesting to note that the EU27+UK experienced a 20.4% increase
on its own.
This year, the country adding the most subscribers is located in Western Europe. France added
2.787.000 new FTTH/B subscriptions, whereas Russia came second adding 1.681.000 new FTTH/B
subscribers. Spain rounds out the top 3 with 1.436.000 new FTTH/B subscribers. Other countries also
1 The EU 39 includes Andorra, Austria, Belarus, Belgium, Bulgaria, Croatia, Czechia, Denmark, Estonia, Finland, France, Germany, Greece,
Hungary, Iceland, Ireland, Israel, Italy, Kazakhstan, Latvia, Lithuania, Luxembourg, Malta, Macedonia, Netherlands, Norway, Poland,
Portugal, Romania, Russia, Serbia, Slovakia, Slovenia, Spain, Sweden, Switzerland, Turkey, Ukraine and United Kingdom
2 Between September 2019 and September 2020
3 The EU 27 + UK includes Austria, Belgium, Bulgaria, Croatia, Cyprus, Czechia, Denmark, Estonia, Finland, France, Germany, Greece,
Hungary, Ireland, Italy, Latvia, Lithuania, Luxembourg, Malta, Netherlands, Poland, Portugal, Romania, Slovakia, Slovenia, Spain, Sweden,
United Kingdom
experienced an outstanding increase in their number of subscribers such as Turkey (+ 718.000) and
Germany (+ 694.000).
By September 2020, the EU39 FTTH/B take-up4 rate raised to 44.9% in comparison to the 43%5 rate
registered by September 2019. For the third consecutive year, the take-up rate for EU27+UK
surpasses the EU39’s one by reaching 46.9% (as opposed to 43.3% in September 2019).
Fibre technologies have been continuously evolving during the last few years with a predominance of
FTTH architecture over FTTB (63% vs 37%). Alternative Internet Service Providers are still constituting
the largest part of FTTH/B players, with a contribution of around 57% of the total fibre expansion. It is
interesting to note that many countries where legacy infrastructure still dominates have modified
their strategy deploying more FTTH solutions, migrating from existing copper based and cable-based
networks towards fibre and are even intensifying copper switch-off. Nevertheless, three historically
copper-strong countries (UK, Germany and Italy) are accounting for almost 60% of homes left to be
passed with fibre in the EU27+UK region. T