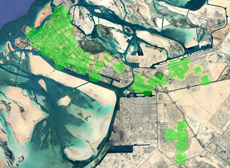 The green areas on the map show 5G availability in central parts of Abu Dhabi. The company has a similar map showing good coverage in Dubai. The National reports Etisalat is rapidly putting up 1,000 base stations. Those should be able to serve most of the 9.4 million population, concentrated in a handful of densely packed cities.

You do not buy a 5G service, just a phone. Your 4G plan will automatically connect to a 5G tower when in range. Service plans start from about US$50/month. The available phones are from XTE, Oppo, and Huawei, all costing over US$1,000.

Etisalat is using mid-band, 3.5 GHz spectrum. Users can expect speeds of 100-500 megabits down, although the company has circulated a limited test at over a gigabit.

The National also reports that Du, Zain, and Saudi Arabian Telecom are also close to turning on 5G networks. In one week last fall, press releases went out that three of these companies had "deployed" 5G. Close examination discovered that the "deployments" were really trials from a handful of locations.