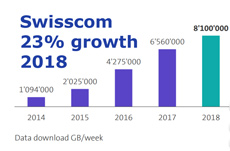 Update 5/12 Iliad/Free in France announced 28% in 2018 (end) In the developed world, the era of exponential growth is long gone. 100% annual growth is now just a memory, that ended when most of the population acquired smartphones. In India and Africa, only a minority have smartphones today, so growth is higher.

Verizon and AT&T both estimate wireless productivity growth of ~40% per year. Traffic growth and declining cost per bit roughly match. The result: Cost per customer is roughly flat. If prices are roughly flat, which is common, profit will remain roughly constant. In 2017 & 2018, profit at most major telcos has risen slightly. That confirms the Verizon and AT&T productivity estimates.

Analyses from Nokia, Sprint/T-Mobile, and many others assume traffic growth of 50-60% going forward. This is highly unlikely and the conclusions are meaningless. One Nokia projection makes that error and several others, resulting in a conclusion telcos must increase network spending or become seriously congested by about 2022. Actually, nearly all telcos should be fine through at least 2025 and probably 2030 at roughly constant capex.

Which is great news unless you are an equipment vendor or trying to scare regulators.