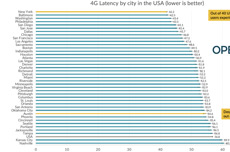 Improving the backhaul/transit system and/or installing an Edge Cloud within the carrier network can bring that down to 15-25 ms in many places.

1 ms is possible in the lab with test equipment, but the actual gear going into the field is about 10 ms from phone to tower (Verizon and AT&T data.)

To that, you have to add the time from the tower to the server, which is the majority of the current latency.

The backhaul/transit delay is greater than the "air latency." The implication is that improvements behind the tower can contribute the most to reduced latency. Telefonica, Deutsche Telekom, and Verizon are proving that in the field.

Enrique Blanco at Telefonica has reduced the number of hops to about four from one end of the network to the other. Deutsche Telekom is actively building an Edge Cloud and seeing 20-25 ms.

Verizon is the most aggressive. Its 5G build is one of the most extensive in the Western world. Less known is that Lee Hicks' One Fiber plan is ripping out 200,000 pieces of equipment and replacing them with about 20,000. The new gear is much faster and the number of hops fewer. Verizon hasn't released any latency figures but I'm sure it's down substantially.

Hicks has said the rebuild pays for itself in two or three years. "We are saving 50% the first year." Overall, including Massive MIMO, carrier aggregation, and 5G, Verizon's costs are falling at 40% per year.

NR is not a near-miraculous way to reduce latency and investing in other parts of the network probably has a larger payoff.