December 1 for 5G in Korea 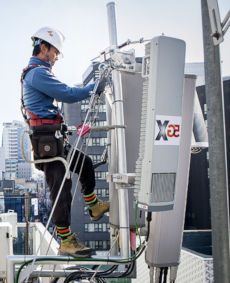 Korea was one of the first to demonstrate 5G. Verizon CEO Lowell McAdam visited Korea, saw it worked, and planned a US$20 billion project, now started. The three Koreans, working with the government, had agreed to a March, 2019 official introduction. Reports the date has been pulled up to December 1 are now confirmed by the Korea Herald.

The picture is a mid-band Samsung 3.5 GHz unit with 32 antennas. The unit is 1 meter in height and 23 centimeters in width, weighing 24 kilos. It's being installed by SK, in the Myeong-dong neighborhood of Seoul.  Several other cities are ready to go.

Korea was the first or second testing mmWave, but I believe at least two of the three telcos are emphasizing 3.5 GHz. I believe the likely speed is one gig peak, 100-400 megabits typical

The details of the SK plans are from the Herald. The rest is mine.