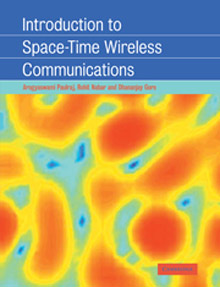 Sebastian Anthony has a good introduction to .11ax at Netflix and Comcast are using 15 megabits down for 4K. 15 channels fit in 300 megabits. (Anthony @mrseb is about to launch Ars Technica in the U.K. If Ars in the U.K. matches the quality of Ars U.S., it will instantly become one of the top tech pubs there.)

LAS VEGAS – January 5, 2015 – CES -- Quantenna Communications, Inc.. the leader in ultra-high performance Wi-Fi, today announced that it is demonstrating its 10G Wi-Fi™ platform at CES 2015, the world’s first system to fully implement full 802.11ac Wave 2 functionality including fully configurable up to 8x8 MIMO, Multi-User MIMO (MU-MIMO) and 160Mhz channel support with the ability to deliver up to 10Gbps in total Wi-Fi network capacity.

As Wi-Fi usage continues to explode, True 8x8™ provides the flexibility and scalability to meet the growing demand for Wi-Fi capacity. “Since the announcement of our 10G Wi-Fi platform technology development, we have been overwhelmed with the positive feedback from our customers and service providers. They immediately saw the advantages a true 8x8 MIMO system can deliver in their future home gateways. Today we are excited to be demonstrating the platform,” said Dr. Sam Heidari, Quantenna CEO.

With 10G Wi-Fi™ unmatched capacity, reliability and coverage both inside and outside the home, service providers can transform residential gateways into hotspots enabling service providers to enhance their subscribers experience and increase their access to Wi-Fi. Demand on Wi-Fi networks is growing exponentially year on year.

Parks Associates data shows the number of US broadband households with three or more connected devices has doubled from 9 percent in 1Q12 to 18 percent in 3Q13. Furthermore, the number of Internet-enabled devices in the home is increasing and is expected to reach 25 per home in 2017 (source: OECD). Simultaneously, half of the Internet traffic is expected to run through Wi-Fi by 2018, according to the 2014 Cisco VNI report. As broadband access data rates increase and with increasing dependence on Wi-Fi for all aspects of people’s lives, Wi-Fi capacity and performance must be optimized within the limited available spectrum.

The scalable 10G Wi-Fi platform with its world’s first True 8x8 is designed to meet the on-going explosion in the number of Wi-Fi clients while limiting interference and optimizing overall spectrum usage efficiency and maximizing so-called “geo-capacity” across entire neighborhoods and apartment buildings. “The growth in the number of connected devices in a home network is continuing and congestion in home networks is becoming a real problem affecting the user experience,” said Tejas Mehta, research analyst, Parks Associates. “As device manufacturers, technology partners, and service providers all search for solutions to address the congestion problem, Multi-User MIMO (MU-MIMO) is emerging as a strong candidate to address this problem. A significant number of connected devices in a home network are mobile devices such as smartphones and tablets with one or two spatial streams, making MU-MIMO a particularly attractive proposition.”

“Wi-Fi usage continues to explode, presenting challenges on how best to scale the gateway to meet those requirements. We were the first to address this with our unique True 4x4™ starting with 802.11n solution and we continued this leadership with the world’s first 4x4 802.11ac solution. We are extending our leadership with our True 8x8™ platform.

Others are promising to solve the problem the wrong way by simply stacking more radios on top of each other. So-called ‘dual radio’ or ‘tri-band’ solutions actually compound the problem as these extra radios compete with each other for spectrum and induce additional interference reducing overall capacity,” added Dr. Heidari. “We are implementing the right solution with higher order MIMO configurations including 8x8 in one baseband. We have established ourselves as the ultra-high performance Wi-Fi leader and we have raised the bar yet again with our 10G Wi-Fi platform. We will continue to deliver on our mission to provide the highest performance and most reliable Wi-Fi experience in the world.”

To set up a time to meet with Quantenna for a demo of the new 10G Wi-Fi platform at the company’s Palazzo Hotel suite during CES in Las Vegas from January 6-9, 2015, please email This email address is being protected from spambots. You need JavaScript enabled to view it.. About Quantenna Communications, Inc. Quantenna is the global leader and innovator of ultra-high performance Wi-Fi semiconductor and system software solutions that establish benchmarks for speed, range, efficiency and reliability.

Quantenna pioneered the delivery of seamless multimedia video and data anywhere indoors and outdoors. Quantenna was the first to deliver 4x4 chipsets that apply and expand 802.11n and 802.11ac Wi-Fi standards, and the first to implement MU-MIMO, an ingenious technology for transmitting data to multiple devices at once, dramatically increasing Wi-Fi network capacity while using the same amount of limited spectrum.

Quantenna continues to innovate and earlier this year unveiled the world’s first 10G Wi-Fi technology for a new generation of access points in the home, the enterprise and public spaces. With an innovative architecture enabling MIMO configurations up to an unprecedented 8x8, throughput and capacity up to 10Gbps and universal support for MU-MIMO clients, Quantenna’s 10G Wi-Fi will deliver extraordinary Wi-Fi capacity and performance while utilizing the minimum spectrum required and therefore creating the world’s maximum Geo-capacity Wi-Fi.

Quantenna is shipping tens of millions of its Wi-Fi chipsets that are being deployed by Tier One retail OEMs and telecom, cable and satellite service providers worldwide including AT&T, DirecTV, Orange and Telefonica. With the industry's highest performing Wi-Fi solutions, Quantenna is Wi-Fi Perfected. Quantenna is headquartered in Silicon Valley, with offices worldwide. For more information, visit www.quantenna.com. Follow us on Facebook, LinkedIn and Twitter.

FREMONT, CA – December 17, 2014 -- Quantenna Communications, Inc. a leader in ultra-high performance Wi-Fi solutions, announced today that it has closed a new investment round of $22 million to continue to fuel its rapid growth. Leading new investors in this round were Centerview Capital Technology, Vivint and NTT Group. All major existing investors including Sequoia Capital, DAG Ventures, Rusnano, Sigma Partners and Venrock also participated. In conjunction with the financing, Quantenna announced that Ned Hooper and Harold Hughes have joined its Board of Directors. Mr. Hooper is a Founding Partner of Centerview Capital Technology. Prior to Centerview Capital, Mr. Hooper was the Senior Vice President and Chief Strategy Officer of Cisco Systems. Mr. Hughes is a seasoned executive who has held many prominent leadership positions including CEO of Rambus, CFO of Intel, and directorship at several technology companies.

Quantenna will use the funds to expand its investment in technology and customer success as the fastest growing wireless silicon company in the world. Quantenna has shipped tens of millions of its Wi-Fi chipsets that are being deployed by tier one telecom, cable and satellite service providers worldwide including AT&T, DirecTV, Orange and Telefonica. It has also been selected by numerous retail OEM’s for their highest performing products.

Earlier this year, Quantenna unveiled the world’s first 10G Wi-Fi technology for a new generation of access points in the home, the enterprise and public spaces. With an innovative architecture enabling up to an unprecedented 8x8 MIMO configuration, throughput and capacity up to 10Gbps and universal support for MU-MIMO clients, Quantenna’s 10G Wi-Fi will deliver extraordinary Wi-Fi capacity and performance while utilizing the minimum spectrum required and therefore creating the world’s maximum geo-capacity Wi-Fi.

“Customers continue to demand higher quality, more reliable wireless networks in the home, enterprise and outdoors. Quantenna develops market leading Wi-Fi solutions that enable better coverage, throughput, and video quality of service to deliver the highest performance most reliable Wi-Fi experience,” said Ned Hooper, Founding Partner of Centerview Capital Technology. “We are thrilled to be investors and active board members to continue the growth and expansion of the business.”

“Consumer’s dependence on Wi-Fi in their everyday lives continues to increase, creating expectations for higher performing Wi-Fi. Quantenna has continued to innovate to meet and exceed these expectations,” said Harold Hughes, former CEO of Rambus and CFO of Intel. “I am excited to join the Quantenna board of directors to share my experience with the executive team.”

“The Quantenna team is honored to have both Ned and Harold join our Board and we look forward to working closely with them as we enter the next phase of our growth,” said Dr. Sam Heidari, CEO of Quantenna Communications. “Ned and Centerview Capital Technology will bring a wealth of strategic and operational experience in our core and adjacent markets,” Heidari continued, “and Harold’s extensive financial and operational insights will be instrumental as we scale through our accelerating growth.”