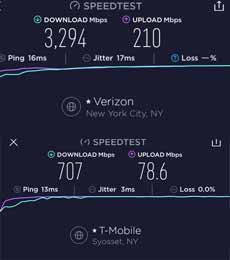 Your speed will almost always differ. But testing by Milan Milanovich of Ookla, in an ideal location on lightly loaded networks, did get remarkable speeds: 3.294 Gbps down, 210 Mbps up on Verizon mmWave and 707 Mbps/79 Mbps on t-Mobile Mid-band. That's two or three times the likely typical speeds on those networks.

5 years ago, Huawei showed me 5G delivering 20 Gbps; there never was a doubt these high speeds were not impossible. No one expects common speeds to be this high, however.

The latest testing from Ookla on mid-band download speeds was in the low hundreds. Based on that, the speeds reported by British and other European carriers, and precise comments from T-Mobile, I've been saying typical mid-band is 100-400 down, and occasionally higher.

It's impossible to be more precise without further data. No company outside of China and Korea has an appreciable load on a 5G network. Korean government data and independent testing are contradictory. There is no reliable average speed data from China.

There are essentially no production deployments of mmWave except Verizon. Verizon mmWave apparently covers less than 5% of the population. In 2018, Verizon was saying they would reach 30% of the U.S. in 2021 or 2022. That has now been delayed, at least to 2014 and possibly later.

Carriers in China, Korea, and Japan are promising their governments mmWave in 2022 but none have committed to more than a pr deployment. Based on reduced traffic growth, there are very few locations that require mmWave capacity before 2024-2027 and probably later. (Peter Jarich at GSMA is hopeful that mmWave will be required by bandwidth demand earlier than I'm assuming. GSMA has earned a strong reputation and their opinion deserves respect. My projections are based on traffic growth filling to below 30% in most of the developed world, GSMA hasn't released the model behind their conclusions.

The 13 ms ping at T-Mobile is important to note. Verizon specifies 5G latency at 30 ms, reduced to 20-30 ms with their (very limited) Edge network. Verizon claims 20-30 ms is "very low latency." but it obviously is not.