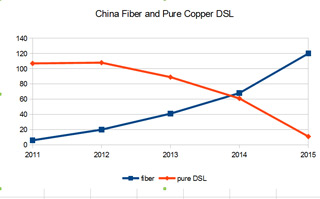 120M Chinese have fiber home connections, more than the entire rest of the world. That's actual connections (including businesses), not availability or homes passed. When I first saw that figure in Google translation from the Chinese, I thought it a program problem. But now the authoritative Point-Topic data confirms it. P-T counts 213M Chinese connected at the beginning of this year, a number confirmed by financial filings and government data.

The Chinese government decided a few years ago that a faster Internet was good for the country. They made it so, with the cooperation of government-controlled carriers.

China Telecom has 115M broadband subs, China Netcom 72M, (company data) dwarfing other carriers worldwide. The growth in 2015 was 6.5% (P-T), a far drop from the 15-20% growth of 2010-2012 but fastest among the top ten broadband countries. The growth seems to be slowing as 4G becomes near-ubiquitous at attractive prices. 4G ARPU at China Telecom is about $12. China Mobile added 25M 4G subscriptions in February, 2016

Since 2012, the number of pure DSL lines dropped from 108M to 11M. Some pure DSL was replaced with hybrid fiber/DSL, but most were migrated to fiber. The pure DSL drop in 2015 was an astonishing 48M. That was enough to produce a 19% drop in pure copper DSL lines worldwide.

Update 5/8 From Chris Lane, I've learned there are 18M cable modem lines in China, Lane confirmed the ~$7 for the slowest service, which Phil McKinney of Cablelabs told me in a radio interview. 30 meg is ~$14, 100 meg $21. Another datapoint that the U.S. can deliver broadband for the poor at $9.25.