10% Will Cancel Broadband Next Year for Wireless Only: Reputable Researcher 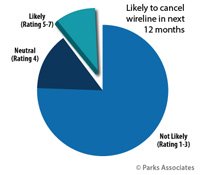 I'm pretty sure it won't be that high, but with "unlimited" wireless it should become more of a factor. Parks Associates, a decent research house, just put out a survey, "10% of U.S. broadband households likely to cancel their fixed broadband Internet service over next 12 months. ... 15% of heads-of-household ages 25-34 are likely to cancel their fixed broadband service in the next 12 months."

Wireless broadband is now fast enough many places for almost all practical purposes. Much of the U.S. is covered at 20 meg or more, higher than most DSL. That's enough for 5 HD streams. The speeds in many locations are headed to 50-150 megabits over the next two years.

The limiting factor has been the cap, often at 2-10 gigabytes.

With the average home using 125-200 gigabytes, that's not even close. The U.S. "unlimited" have soft caps between 22 & 28 gigabytes, slowing you down when congested. That's ok for some, and will undoubtedly increase as wireless tech improves.

A decade ago, Anton Wahlman, the best broadband analyst on Wall Street, predicted a major shift to wireless only. This was a huge unknown in the U.S. Broadband Plan in 2009-2010. I conducted a survey of analysts; nearly all of us expected a meaningful shift, perhaps 10-25%. It hasn't worked out that way.

U.S. wired broadband figures continue to increase at a modest pace. If we are really seeing an exodus, that would be unlikely. There are surveys that say ~10% of the population is wireless/mobile broadband only.

Don't say you haven't been warned.

Thanks to Laura Hamilton for pointing me to the story.

10% of U.S. broadband households likely to cancel their fixed broadband Internet service over next 12 months

“The diminishing use of fixed-line voice services may foreshadow the decline of fixed-broadband Internet services as the mobile data capabilities of smartphones increase and mobile carriers in the U.S. re-introduce their unlimited data plans,” said Harry Wang, Senior Director of Research, Parks Associates. “Not surprisingly, younger consumers are more likely to go completely mobile for their Internet needs; 15% of heads-of-household ages 25-34 are likely to cancel their fixed broadband service in the next 12 months.”Parks Associates notes that a growing number of value-added mobile services, such as T-Mobile’s zero-rated HD video streaming offer, AT&T’s zero-rated DIRECTV Now service, Sprint’s Amazon Prime service, or Verizon’s Go90 video service, may have emboldened broadband cord-cutters.

“Subscribers to value-added mobile data services are substantially more likely to cancel their fixed broadband service,” Wang said. “This suggests that the use of a mobile phone for entertainment purposes contributes to the consumer perception that they can substitute mobile for fixed-data service with little or no pain.”


“For frequent movers, mobile data services offer greater convenience as these consumers don’t have to repeatedly subscribe to and cancel fixed-line services,” Wang said. “Mobile carriers could target these consumers in particular with value-added services that make it easier for them to secure a full complement of services even as they change addresses.”