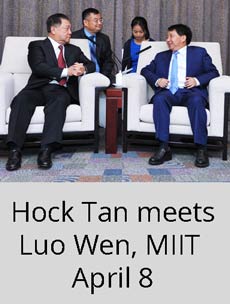 Update: May 13: Trump blinked. He tweeted, "Too many jobs in China lost,. Commerce Department has been instructed to get it done!" Previous: The maximum cost to keep the company going for two years would be about $10B if they didn't sell a single product. With some fast engineering work and smart management, survival would cost less than $5B.

The money will be found and the company almost certainly saved. 80% to 90% of ZTE's requirements can be immediately sourced in Asia. DC now needs to cut the U.S. losses. Apple stock lost $60B when Trump declared war. China's response will include developing national alternatives for any product that is dependent on a U.S. supplier. They also will go for the international market.

MediaTek or Samsung can replace Qualcomm phone chips. Japan, Korea, and now China make memory chips. Nearly all screens are built in Asia. ZTE can switch Broadcom DSL chips to Sckipio in Israel or Metanoia. The list goes on.

The only parts that might be a problem are radio frequency front ends. I've researched that and several Chinese companies are prepared to pick up the slack. There is a strong research group at China Eastern University. ZTE has 2,000 chip engineers at their Sanechip division, which already offers PA and other RF chips. Globalfoundries is building a 12 nm FD-SOI fab in Chengdu, natural for RF chips.

ZTE is strategic to the Chinese. It files thousands of patents every year, a key tool to reduce the Chinese deficit. For the eight consecutive years, ZTE has ranked in the world's top three international patent applications. It's the fourth largest telecom supplier worldwide and has a third of the Chinese market. The three giant telcos always split their orders between Huawei, ZTE, and a little for the Europeans. They need ZTE to have a good alternative to Huawei and will protect it.

They announced they suspended operations, with the press outside China writing as if ZTE is doomed. This feels like a tactical move, to put pressure on the Americans to cut their losses.

ZTE does just under $20B/year in sales, of which 3/4ths goes to building the products. They spend $2B on R & D and about $3B for everything else. The Chinese government owns about a third of the company, $7B before the attack.

The U.S. makes no components that cannot be replaced; nearly all are available off the shelf from others. ZTE has 2,000 engineers ready to redesign the products; some would be back on the market in months.

The photo of Hock Tan & Luo Wen, MIIT Deputy Minister, has a table in the middle cropped out for space reasons. Original here for comparison.