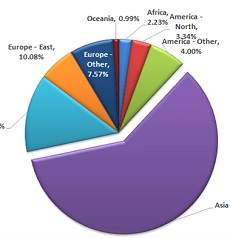 Point-Topic counted 931M landline broadband connections at the end of 2017, growing at 2% per quarter. They have the most reliable figures but inevitably miss a few. The world has probably passed the billion already and almost certainly will by the end of the year.

The purple in the Point-Topic chart at left is East Asia, mostly China. The light blue is Asia-other. Growth in Vietnam and Malaysia has been strong. India will soon become a much larger factor as Reliance Jio chases 50 million fiber homes. Ambani has acquired 215M 4G customers in less than two years so his remarkable fiber goals are achievable.

China Mobile added 4.6M FTTH in the month of June, proving Chinese growth is not stopping. There is a natural limit in sight; China has ~450M households. India, with roughly the same population, only has ~20M landlines, so is likely to become the center of landline growth in a year or two.

I've been collecting datapoints on the growing number of broadband wireless-only homes and have been expecting landline to fall in many countries. I'm glad that so far I seem to have been wrong.