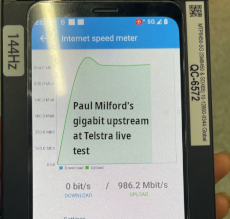 We said, 'Okay, take that truck, drive it around the backside of the building,' so there is no possible way you will have a direct line of sight, 2000 feet away, it delivered 1.4 gigabytes of throughput. And the reason was that it took all the different reflections and the computers were able to process and then get that signal back up."

On upstream speed, Verizon reported 250 Mbps in 2019, although that was not to a phone. It also has demonstrated much higher speeds.  I was startled by Lum's results.

Downstream in Lum's testing was excellent at over a gigabit. One location was 1.9 Gbps. Lum didn't have indoor data, which is problematic for mmWave. 70-80% of all wireless traffic is indoors, so I always look for that figure.

Unfortunately, numerous locations in the cell site radius could not get the 5G, presumably because of trees or buildings.

Lum's testing was paid for by the CWA union, which believes one way to keep its members employed is to make sure Verizon has a great network. The report was highly detailed and clearly carefully done. I also sent it over to Verizon for fact-checking before I published this. The technology is ready for much better upload speeds. I hope Verizon puts it to work.

Verizon has covered less than 5% of the US with mmWave. In 2018, VZ told Wall Street and I reported, the intent was to cover 30 million homes with mmWave by 2021 or 2022, about a quarter of the US. It seems to have the same goal, postponed several years from today.

Meanwhile, it has started to build in the $45 billion of mid-band spectrum they purchased. Verizon is about to turn on its first mid-band sites, presumably sites chosen to impress. I expect excellent results as Verizon mid-band goes forward, although its coverage will lag behind for several years.

T-Mobile and others have demonstrated mid-band at hundreds of megabits down; I've tested 532 Mbps outdoors on a lightly loaded network and just recorded 68 Mbps upstream, despite a window. I often get lower tests on TMO 5G, however, especially indoors. It fell to less than 2 Mbps in a back bedroom behind walls.

TMO has covered two-thirds of the US with mid-band, heading quickly to over 90%.

I, Lowell McAdam, & Hans Vestberg made a huge mistake on mmWave.

One of the biggest mistakes of my career was my overenthusiasm for mmWave three years ago. I put in a modest warning we didn't have enough data, but buried it in my enthusiasm. For 3 years, I've been saying Verizon's mmWave would be the best network in the world. Everyone else is doing mid-band, at about a third the capacity.

I was wrong. I'm getting better upstream on my Celero phone of Boost/T-Mobile mid-band than Verizon is delivering in mmWave. For whatever reason, Verizon has throttled its upstream. It is a TDD (Time Division) network that should be capable of any desired split between upstream and downstream. Since fast upstream is Verizon big advantage over cable, this appears dumb to me. Verizon wouldn't explain its choice when I asked.

I had seen mmWave do 20 Gbps in the lab.  Michael Thelander, a good engineer, found in a 2018 field test

"Who would have thought a millimeter wave signal in an area 100% blocked from the serving cell tower by the surroundings would still be capable of supporting good data speeds? Millimeter wave signals are far more resilient than we expected, even at distances exceeding several thousand feet. Tree foliage, passing school buses, buildings, parked cars, balding heads, and glass impacted the received signal, but the resultant signals were still capable of delivering meaningful data rates – thanks in part to the 400 MHz radio channel. Verizon can deploy 800 MHz channels in some markets." The results were generally good up to 1,000 meters and behind buildings."

Craig and Jessica Moffett came in with later data that was discouraging. Verizon clammed up, but Mike Dano of Light Reading said they were cutting back.

I'm now sure that the cost and economic models I used in 2019 were far off because of overestimates of what the actual performance would be. Vestberg in 2018 implied cost per home of mmWave would be $200-400 and it would be very lucrative. Those figures are clearly underestimated.

I believe I & Hans Vestberg made too much of a few favorable tests because we wanted to believe. Psychologists call this optimism bias and it is strong in most people. I have to do a better job to avoid similar mistakes. I make many mistakes, the Butler said to Humphrey Bogart.

I made a second mistake when I assumed the enormous bandwidth of mmWave would give Verizon a major strategic advantage. Millimeter Wave supports roughly triple the capacity of midband, depending on how you compare. Vestberg said he had a plan for how to monetize the capacity, but after three years no new markets have developed.

It appears there is no market for the capacity coming online, both mid-band and mmWave. Except for special locations such a busy train stations, it's not needed. That's true worldwide: except in limited locations, it will take years to put to work all the bandwidth being built just in mid-band. mmWave works, but no carrier in the world is building aggressively because it's not needed.

I've been reporting since 2014 that wireless capacity/cost per bit is improving at a ferocious rate. Lee Hicks of Verizon estimates 40% per year. Vestberg says his costs are falling by 90%! He cut capex the last 5 years and sold "unlimited" to most customers, but the capacity margin has doubled. The over-capacity is almost guaranteed to get worse as mid-band deploys.