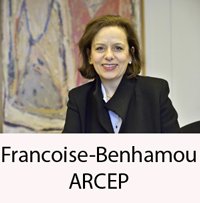 Estimate for 100% ultra-high speed goes from € 20 billion to € 34.9 billion. Cour des Comptes, the French government auditor, has recommended a rethink of France's plan to bring very high speed to 80% and high speed to 100%. They estimate the cost will be much higher and the expected private investors are not interested. Instead, they call for "un « mix technologique »"

Sebastian Soriano, chief of regulator ARCEP, warns of "rural desertification and the risk of decommissioning of certain territories, their inhabitants and their businesses." He recommends only modest changes to the plan, such as wholesale operators in rural areas.

A major part of the difference in estimates may be a very probable lie in the official "100% plan." The U.S. Broadband planners calculated that 44/100ths of 1% were so hard to reach they blew the numbers sky high. When Blair Levin wanted to justify not recommending fiber, he included the extremes and had a huge figure to "prove" it was impossibly expensive.

In reality, the planners always assumed the last one or two percent would be served by satellite and the cost would have been much lower. I don't believe any major country is serious about a high speed connection beyond about ~98% and any 100% promise is a "politician's truth."  Deutsche Telekom is pulling the same trick to argue that fiber is impossible for most of Germany. Their estimates are much too high.

The Australian NBN is costing twice as much as original estimates, which in turn were twice as high as typical costs at major carriers like Verizon. Beyond the political rhetoric, it has always been a "mixed technology" network: Fiber to 93%, wireless to about 6% and a dedicated satellite to the remainder. I'm guessing that what Cour des Comptes is suggesting is similar, more reliance on satellite and wireless.

I can't analyze the true issues because neither provides enough detail. In addition, Orange/France Telecom has a large government holding that puts it under state control. What they would invest as a "private operator" thus is also a government decision. Soriano and all the principals here are part of the French establishment from the Écoles, which communicates privately as well as publicly.

Gigabit speeds in wireless will be practical in moderately dense areas within the decade through 5G millimeter wave. Grahame Lynch at COMMSDay has long argued that improved wireless would make some of the NBN obsolete. What I saw at Huawei's MBBF in Tokyo has me wondering as well. 5G mmWave has decent reach with good line of sight, Ted Rappaport has demonstrated. 5G Massive MIMO is even more promising for rural areas, especially as beamforming is perfected.

If any readers know the inside story, please email me in confidence.

In Google translation, the  Cour des Comptes report and the ARCEP response. (Remember, these are all politicians.)

In 2013, the State undertook to cover the entire territory within the framework of the "Very high-speed France Plan" in 10 years, reaching 100% of the 35 million residential and professional premises in 2022, of which 80 % Optical fiber to the subscriber. This deployment relies both on private operators and on the initiative and financing of local and regional authorities. For this first assessment, the Court and the regional audit chambers examined 47 territorial projects covering half of the population and one third of the territory. Financial jurisdictions estimate the total cost of the Plan, initially estimated at € 20 billion, at € 34.9 billion. In addition, if the intermediate hedging objective (50% in 2017) is achieved, the insufficiency of private co-investment jeopardizes the attainment of the 100% target in 2022. Financial jurisdictions therefore call for Objectives, to take better account of alternative technologies to fiber to the subscriber, in order to build a cheaper "technological mix" and to integrate a minimum broadband target for all. In general, the Plan focused on the construction of fixed infrastructures common to all publics, without considering the uses, whereas these are only one aspect of the digital transformatiohttp://www.arcep.fr/fileadmin/reprise/dossiers/fibre/avis-arcep-rapport-cour_des_comptes-310117.pdfn.

France chose to privilege the construction of optical fiber networks to the subscriber because of their performance. Other solutions exist that would allow to bring high or even very high speed to satisfactory quality conditions.

To this technological component is added the legal dimension of the Community framework: public intervention can only be subsidiary to private intervention, which has led to a complex market organization in France. This involves public and private operators, but the incumbent, Orange, owns and operates a copper local loop network in a quasi-monopoly position and is the first investor in fiber optic networks, subscriber. Moreover, operators operate in geographical areas with evolving contours and are subject to specific obligations according to their competitive position.

In addition, the State has set quantified targets for very high-speed broadband, whereas local authority initiatives have pre-existed and have only been late in coordinating and financially supporting them.

France lags behind in the deployment of ultra-fast broadband because of its geographical characteristics and less reuse of existing infrastructures. By June 2015, only 45% of households were covered by very high fixed broadband, compared to a European average of 71%, which gives France 26th out of 28.

The intermediate objective of covering 50% of the territory in very high speed from 2017 will be achieved. On the other hand, achieving the goal of 100% coverage of ultra-high speed homes fixed at 2022 and 80% of optical fiber seems to be compromised.

In addition, the € 20 billion of public and private investment announced will be de facto largely exceeded and the equipment program will take place over a much longer period. The absence of private co-financing for the construction of public initiative networks (only € 1 billion of the € 12 billion invested, for € 3 billion expected) requires local authorities to contribute around € 6.5 billion In 2022, much higher than expected. A dead end of financing of € 12 billion of public initiative networks is to be foreseen beyond this deadline.

The financial jurisdictions note that there are deficiencies in program steering at the national level and that there are clear gaps in the organization of the construction and operation of the network infrastructure. The procedures for allocating government grants are cumbersome and complex, even though the central government teams are scattered and poorly endowed.

Cooperation between actors and the interoperability of information systems must be improved, and local public actors must give a regional dimension to their projects. Better steering and better budgetary control are also needed. Finally, the activity and commitments of operators in private initiative areas must be better controlled.

Financial jurisdictions make 11 recommendations to the State, the Electronic Communications and Postal Regulatory Authority (ARCEP), and to local and regional authorities.

In particular, they call for the completion and updating, in the light of the results achieved, of the objectives of the France Broadband Plan by introducing a minimum threshold of upward and downward flow, increasing the use of alternative technologies to fiber optics up to Subscribers by integrating a goal of digital penetration into enterprises and aligning them with the term of digital territorial master plans (2030).