Ready for customers 2019-2021. John Chapman made cable engineering history with the first demonstration of full duplex cable at ANGA COM in Cologne, pictured. The setup doesn't look like much until you realize this is the world's first prototype of a 10 gigabit down, 5 gigabit up, cable system. By using the same spectrum upstream and down, remarkable speeds are possible.

Chapman outlined the path to gigabit cable in 2005. Almost no one believed it possible except for a handful of innovative engineers. His ideas became central to DOCSIS 3.0 and 3.1. Comcast today is offering the gig downstream to millions of customers. If John says FDX gigabit upstream will work, I'm a true believer. (The schedule isn't guaranteed, of course.)

Full duplex communication has a long history, but not at the speeds of today's wireless and modems. Phil Levis & Sachin Katti of Stanford have spun off Kumu Networks, which has ambitious plans for wireless FDX and inspired renewed interest.

FDX for cable is a harder problem. Cable systems are "point to multipoint" - one central unit, the CMTS, attaches to many homes. The challenge with point to multipoint is that an echo canceller can only be used at the CMTS end. 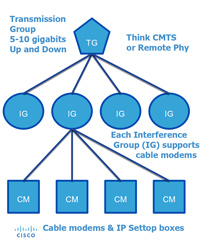 Chapman tells me a key innovation making FDX possible for cable is to break down the users to Interference Groups (IG.) Each IG is RF isolated from all other IGs. This allows the CMTS to use specific FDX scheduling techniques to allocate traffic across IGs to accomplish the goal of filling the same spectrum with both upstream and downstream traffic. The CMTS side relies on a new architecture called Remote PHY. As the name suggests, the CMTS PHY is placed into an optical node. This is where the CMTS echo canceller is located. The Cisco designed Echo canceller operates over a band of 576 MHz with a cancellation of about 47 dB. This allows for 4K QAM in the downstream path and 1K QAM in the upstream path.

20 Cisco engineers developed the software to standardize the Remote PHY, which they which they put into an open source consortium called Open RPD, hosted at CableLabs. No royalties are required. ARRIS and Casa have compatible units and interoperability testing will begin soon.

Adding the remote PHY allows moving the network to (nearly) entirely IP, which I've reported is the Comcast goal. That won't be cheap, but I believe the large saving from IP set top boxes offsets much of the investment.

"The standard is almost ready," he tells me. CableLabs, led by Belal Hamzeh, jumped in last year. "Probably chips in 2018, early units in 2019, and ready for volume deployment in 2020."

Altice shocked the industry by deciding to replace a DOCSIS network at Cablevision with fiber to the home. Chapman believes, "D3.1 and FDX combined eliminate the need to deploy FTTH in a plant that already has HFC." Altice's claim they could deploy FTTH without raising capex seems to me wildly implausible, implying a cost per home far lower than I've observed elsewhere.