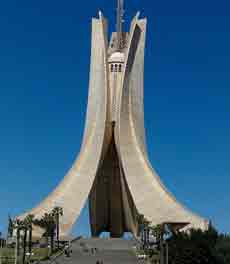 AT&T is fibering 3M homes/year. Telefonica doing millions in Brazil and most of Spain. France Telecom is well along and nearly all of Portugal covered. Bell Canada recently decided to speed up fiber because cable was killing them.

After a year of political wrangling, state-owned Algérie Telecom has signed a contract with Huawei and is ready to go. The initial contract is 1M homes servable, with a plan to go to 3M. Wireless networks spread incredibly rapidly and now fiber (mostly backbone) is also building.

Algeria is relatively affluent by African standards, with a GDP of ~$4,000. The Gini coefficient is 35, much more equal than Brazil (47) or the United States (45). It's similar to Spain.

There is a substantial middle class, many housed in recently built apartment buildings. Algeria is struggling with low oil prices but still was projected to grow at 2% after rapid growth since 2013.

The contract was originally signed more than a year ago, promoted directly by the Minister, Houda-Imane Faraoun. According to the local papers, which I mostly read in translation, normal bidding procedures were bypassed. Ericsson, using Calix gear, and others protested the contract loudly, claiming if they had a chance to bid the price would be lower. The contract was turnkey, Huawei doing the installs and supplying the equipment. Nationalist wanted the installation subcontractors to all be Algerian. The dispute went all the way to the President.

The news articles, as I understand, them, were written to suggest that something corrupt was going on although there was no evidence. From what I read, the Minister may have just taken action to get things done quickly. The reported price in the newspaper, $335/home including installation, is actually below international norms for fiber all the way home.

The 40M Algerians have three mobile carriers: Algerie Telecom’s Mobilis, Orascom’s Djezzy, and Wataniya’s Ooredoo.  While there are more mobile phone subscriptions than people, the networks lag behind. 4G licenses weren't issued until 2016 but now they are building rapidly.

240M Chinese are connected to fiber home, with many more homes passed than that.