5G: It's Almost all Mid-band 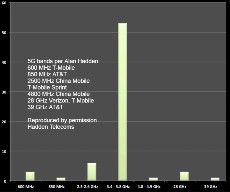 Low-band (the two leftmost) speeds are similar to and often lower than 4G. AT&T averaged 60 Mbps and T-Mobile 48 Mbps.

Millimeter-wave at Verizon is often over a gigabit. Open Signal found an average for 772 Mbps, probably in an area where Verizon is using only half of its 28 GHz spectrum. AT&T is using 39 GHz.

Japan and Korea are testing mmWave but few others.