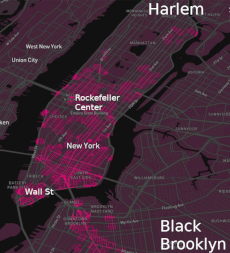 T-Mobile 4G faster than T-Mobile 5G. Sprint has covered 8%+ of the US population with robust 2.5 GHz 5G. IHS three city testing found 5G on 51% of tests in Atlanta, 32% in Chicago, and 25% in Dallas. The 25-40 million people Sprint covers dwarfs any carrier in Europe, where no telco has reported even 2 million people in its serving area. Adjusted for population, only Swisscom and Sunrise Switzerland come close. (Neither has released coverage.details.) The median download speed in Chicago was 124 Mbps, about as predicted.

Sprint's John Saw is an obvious candidate for CTO of the year. Despite a low capex budget, Sprint is bringing 5G to far more of the US than any other carrier. Verizon covered 7% of Chicago and lower percentages of the population in Dallas and Atlanta. AT&T & T-Mobile are far behind with coverage of 3% or less. "T-Mobile’s 5G median download speeds in both Atlanta and Dallas were slower than its non-5G mode speeds in each city."

At left, how T-Mobile serves Rockefeller Center and Wall Street but provides little in Harlem or Black Brooklyn.

Verizon did test at a true gig in one location and often at 200-400 Mbps. That's right on target: mmWave uses more spectrum and typically has three times the capacity. But Verizon has cut capex and now is the slowest of the major US networks. Verizon's mmWave network is the finest in the world, but more than half of Verizon "5G" will be low-band running at "4G-like speeds."

I've just returned from Zurich, Switzerland, where Sunrise has connected 300 towns and villages. Most people in rural areas today live in towns, not dispersed across farms. By upgrading an existing cell to 5G, Sunrise was able to reach over 80%.

Korea is about 70% covered with 90% expected yearend.

BELLEVUE, Wash.--(BUSINESS WIRE)--RootMetrics by IHS Markit, the standard for mobile performance benchmarking, today released the second in its series of 5G First Look Reports, discussing 5G performance by US carriers AT&T, Sprint, T-Mobile, and Verizon in Atlanta, Chicago, and Dallas. The new report shows that each carrier delivered impressive 5G speeds and reliability, although connecting to 5G could prove challenging in the early stages of deployments.

During the nascent stages of 5G rollouts, connecting to 5G at relatively low availability rates is not necessarily a surprise. Mobile network operators often choose to launch 5G only in certain areas of a city and/or may target very specific audience segments, such as enterprise customers. RootMetrics testing has shown that it can often take months or even a few years for network technologies to realize their full potential for end users, but the company does expect 5G service to become more prevalent as the networks continue to make upgrades and as 5G networks mature over time.

RootMetrics was able to record 5G results for AT&T only in Dallas, where it connected to AT&T’s 5G network during just 2.6% of its download tests. However, the carrier’s 5G speeds in the city were impressive. AT&T’s 5G median download speed of 256.1 Mbps in Dallas was the fastest among all carriers across all three cities. At 256.1 Mbps, an end user could download a 600MB video in less than 20 seconds, a dramatic improvement from the roughly 4 minutes it would take to download the same video at the carrier’s non-5G mode median download speed of 19.4 Mbps in the same city.

Sprint was the only carrier with meaningful 5G availability in all three cities, but results were mixed in Dallas.

Sprint’s 5G network was far more widespread than those of the other carriers, with the carrier’s 5G availability rates ranging from its lowest rate of 24.9% in Dallas to a high of 51.4% in Atlanta. In contrast, the highest 5G availability rate recorded by any other carrier across the three cities was Verizon’s rate of 7.1% in Chicago. Sprint’s speeds were much faster on 5G compared to non-5G mode in both Atlanta and Chicago, though the carrier’s most impressive results were found in Chicago, where the carrier registered a 5G availability rate of 32.2%. At Sprint’s 5G median download speed of 123.5 Mbps in Chicago, it would take less than 40 seconds to download a 600MB video. In contrast, downloading the same video at the carrier’s non-5G mode speed of 26.1 Mbps in Chicago would take closer to 3 minutes.

T-Mobile was on 5G during RootMetrics tests at low rates in Atlanta (3.1%) and Dallas (1.3%), and no 5G results were recorded for T-Mobile in Chicago. T-Mobile’s 5G median download speeds in both Atlanta and Dallas were quite slow in general and slower than its non-5G mode speeds in each city. Despite the carrier’s slow 5G median speeds, the carrier’s 5G maximum download speed of 257.7 Mbps in Atlanta points to a promising future for the carrier’s 5G experience. While T-Mobile’s 5G availability was limited at launch, the carrier’s non-5G mode results were strong in both cities, suggesting that T-Mobile subscribers should experience fast speeds and excellent reliability even when 5G isn’t available.

“The 5G era in the US has begun, and the speeds we found during our early testing in Atlanta, Chicago, and Dallas were quite promising. Verizon in particular stood out with its 5G maximum download speed of 1.1 Gbps in Chicago, which was the fastest speed we’ve ever recorded in the US on any network technology. While the speeds we recorded during initial 5G testing showed potential for the future of 5G, our results also suggest that there’s still work to be done before consumers experience the incredibly fast speeds of 5G on a daily basis,” said Francis Sideco, vice president, technology at IHS Markit. “With the exception of Sprint, the 5G availability rates we found were low across the board. That said, the carriers are making near-constant network upgrades across the country, and we expect to see more consistently fast speeds on 5G going forward. We are continuing to test 5G networks across the US to show consumers and enterprises alike how 5G performance evolves over time.”

RootMetrics by IHS Markit combines scientific data with real-world mobile performance insights to provide consumers with an independent view of each network’s performance where they live, work and play. RootMetrics measured 5G performance indoors and outdoors where people most often use their smartphones in and around Atlanta, Chicago, and Dallas: tourist areas, business districts, and other high-population areas. To paint a comprehensive picture of real-world 5G performance, RootMetrics also tested 5G while driving in urban and suburban areas in all three cities.

In the early phases of 5G deployments when the technology typically isn’t rolled out by carriers across an entire city, the RootMetrics scientific testing methodology is the only way to truly characterize the end-user’s real-world 5G experience. While crowdsourced 5G studies often base conclusions on small and/or biased samples limited to specific locations where users choose to submit crowd results, the RootMetrics randomized spatial sampling techniques ensure 5G performance is accurately portrayed from the consumer’s perspective across an entire test location and at different times of the day and night.

IHS Markit (NYSE: INFO) is a world leader in critical information, analytics and solutions for the major industries and markets that drive economies worldwide. The company delivers next-generation information, analytics and solutions to customers in business, finance and government, improving their operational efficiency and providing deep insights that lead to well-informed, confident decisions. IHS Markit has more than 50,000 business and government customers, including 80 percent of the Fortune Global 500 and the world’s leading financial institutions. Headquartered in London, IHS Markit is committed to sustainable, profitable growth.

News Media:
Patrick Linder
RootMetrics by IHS Markit
+1-206-679-4882
This email address is being protected from spambots. You need JavaScript enabled to view it.