The extra cost for the parts needed for 5G phones is falling to between US$25 and US$50. Getting the price down will require some compromises, including few international frequency bands and a relatively slow processor. The phones should work fine for practical purposes.

I - and many others - have revised up our estimates. If I'm right about the effect of a price drop, that will lead to very heavy sales in 2020 and 2021. Some likely results:

Verizon’s 5G smartphone sales are dispersed all over the US, showing that consumer demand goes beyond the cities with 5G coverage.

The US market shows 5G smartphone sales in over 10 cities in May despite Verizon only launching 5G services in Chicago and Minneapolis, according to the latest research from Counterpoint’s US Smartphone Sales by City Tracker. While Chicago did show the highest concentration of sales, it represented only 5% of total 5G smartphone sales according to data collected across millions of sales data points during May.

Kang continued, “The top 10 cities make up just one-third of all 5G smartphone sales in May. This indicates how widespread initial 5G smartphone sales have been, despite early predictions that sales will concentrate in cities with 5G service. Consumers are buying 5G capable devices across the country despite not having a 5G network available in most cases. Minneapolis, one of the two launch cities is not even in the top 10 list. Instead, we see cities like Dallas, Houston, and Los Angeles in the top five cities list for 5G smartphone sales.”

Klaehne added, “In our 5G Korea report, we showcased how Korean consumers began purchasing 5G devices as they took advantage of aggressive promotion strategies and data plans that aligned with consumer needs despite the current network shortcomings. Korea now has all major carriers promoting 5G, and all major brands have a flagship 5G device.”

Counterpoint Research predicts that 5G smartphone sales will see a significant increase in the US once all carriers and smartphone brands are ready with their offerings. Our forecast for the US market for 5G smartphones is more than five million units in 2019.

|IN PRESS RELEASE
|BY MAURICE KLAEHNE

Speaking about US 5G smartphone sales, Jeff Fieldhack, Research Director at Counterpoint Research said, “Current sales of 5G smartphones are limited as there are only two devices available, the LG V50 and the Samsung S10 5G. The mmWave supporting Samsung S10 5G was exclusive to Verizon until the end of June, but all major carriers have launched it now. We believe that H2 2019 will see a sharp increase in 5G smartphone sales as carriers expand their coverage and even more 5G devices launch. Expansion in mmWave capable devices will be key for growth as consumers will be able to see the dramatic speed increases over LTE.”

Except for Apple, all major OEMs such as Samsung, LG, Motorola, ZTE, and OnePlus will sell 5G smartphones in H2 2019. This will increase 5G smartphone penetration drastically as compared to H1 2019. Fieldhack added, “We believe Apple will not have a 5G capable iPhone available till 2020. If Apple had launched a 5G device this year, we believe that the US market size for 5G would have been at least 60% higher than the current estimate. In 2020, there will be an even greater acceleration in 5G smartphone sales due to 5G iPhones becoming available.”

Research Analyst, Maurice Klaehne said, “Initially it was thought that there would be a high concentration of 5G smartphone sales in areas where there is 5G coverage. However, our research indicates that 5G smartphones are being bought all over the country. This trend will likely increase as consumers want to buy the newest devices, future-proofing their purchase for the next several years. Promotions and marketing for these devices will also likely ramp up in H2 2019.”

Klaehne continued, “We saw this trend initially in Korea where sales of 5G smartphones crossed 1 million in just 70 days. It all started when every carrier had a 5G smartphone in their portfolio, and an all-out marketing war ensued. Subsidies for 5G devices went from ~US$250 to ~US$500 in a month, creating a hyper-subsidy environment. Consumers often chose to purchase a 5G device over 4G alternatives because they got it at a lower price point with better specs. We believe a similar trend will develop in the US.”

Elaborating on global 5G roll-out, Tom Kang, Research Director, added, “We are cautious on our forecast, but we think 5G will eventually have a faster roll-out than 4G LTE. Looking back at LTE, the network was split between FDD-LTE and TD-LTE, which resulted in a slower roll-out over two years. Only the US and Korea deployed LTE in the first six months. Europe and China started one year later. Globally, the ramp up will be faster because there is now a universal standard for 5G. Operators in the US, China, Europe, and Korea will all be launching within the same 12-month period. It is an unprecedented network deployment. This will drive global sales to 22 million by the end of 2019.”

|IN INSIGHTS
|BY SUJEONG LIM

It has been a little over a month since the three major carriers in Korea – SK Telecom, KT and LGU+ – took the country into the 5G era by launching commercial services simultaneously. The three companies launched the world’s first 5G service at a launch event with celebrities including Korean pop-stars, famous sports players, gamers on April 5, 2019. Impressively, the commercial rollout of 5G has been achieved in a short span of time as it was only four months ago in December 2018 that the first successful 5G transmission took place in Korea.

The number of subscribers exceeded 100,000 within one week of service beginning, and after 25 days, 260,000 people have subscribed to 5G. The rapid increase in initial subscriber numbers compared to 4G LTE shows that users’ interest and expectations for 5G are huge.

Let’s take a look at what we have learned from the first month of 5G in Korea:

Counterpoint Research used Samsung’s Galaxy S10 5G and measured the download speed using a mobile app. The highest speed was 682Mbps measured at Gimpo city, followed by 497Mbps near Gangnam subway station. Latency is about 20-40ms on average, which does not show a big difference from 4G LTE. 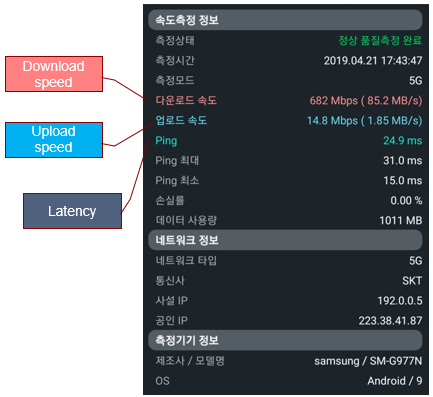 As such, if we look at the standard tariff plans for 5G from each carrier, on an average the rates are about 12% higher than that of 4G LTE. However, 5G plans offer more than 150GB of data per month. Of course, there are differences between carriers.

What are the problems?

How will it do in the future?

In 2019, the first year of 5G, we expect 5G smartphone shipments to be around 1.7 million and account for 9% of the total handset shipments. We estimate the market to pick up the pace when Apple releases 5G iPhones next year. The decline in 5G smartphone price coupled with a drop in 5G component prices, expansion of product lineup, and securing related content will be important factors for market growth.