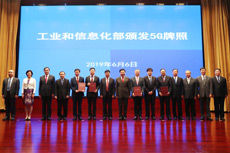 China Tower has 2.2 million sites and expects the carriers to upgrade most of them in the next few years. Towers and backhaul are in place. The upgrade will only require new radios, usually less than 15% of the cost.

Huawei, ZTE, and now Datang are ready with as many radios as the companies want to install. My guess is that the government will make available money to speed the build. The likely limiting factor will probably be the time required to train an army of engineers.

Equipment is in plentiful supply. Huawei has shipped 100,000 base stations already and does not need U.S. parts except perhaps for the phones. ZTE is selling around the world. The U.S. dominates the production of FPGAs (Field Programmable Gate Arrays,) used to replace several chips in a design. When sales volume goes past ~10,000, FPGAs are normally replaced by custom chips; Huawei is at that level. Where that's not practical, FPGA's can be replaced by a group of chips. In routers and other network equipment, there's room for an additional circuit board.

A revitalized Datang will be China's 3rd 5G supplier. It was a pioneer in 3G TD-SCDMA but fell behind in 4G. (The company's TDD patents are foundational for 5G.) The government in 2018 merged Datang with Fiberhome, one of the world's largest producers of fibre equipment, which is showcasing the new Datang gear around the world.