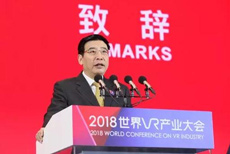 The First Secretary's support for VR could be a factor in China's decision about how to build 5G networks. China is going to install over a million 5G radios, mostly between 2020 and 2023. They may or may not put servers at the cell. The decision will be made in the next few months.

AR/VR is the only consumer application that really needs low latency and might drive volume in the next few years. If the Party Secretary and the Minister want VR, that could tip the decision to the faster (<15 ms) technology. No one in the West is going that low for years.

Expert opinions differ on whether VR needs less than 10 ms latency or works well up to about 20 ms. 5G alone is not enough to lower latency to that level. On-network cloud servers are required to bring latency below 25 ms. DT, Verizon, and many others are planning servers to bring latency down to 15-25 ms. Not all will build on-network clouds. Those that do build a cloud will probably put servers further back in the network, each supporting many cells.

5G's current "air interface" has about 10 ms latency. If you put servers on all cells, the latency only goes up by a few milliseconds. The cost is o high. A Level 2 server, one to three hops away, can get to 15 ms or a little more. Many, including AT&T, are testing such systems. BT estimates you could cover the UK with about 1,000 servers. Other carriers are planning far fewer servers, at least for now, further from the towers. That will add another 5-10 ms.

China is generally considered far ahead of the West in AR & VR. Americans, even informed ones, are astounded when they see what's happening in China. Some VR apps come from small individual creators, but giants like Tencent and China Unicom are spending heavily.  (In Google translation.)

At present, a new round of scientific and technological revolution and industrial transformation are booming, and virtual reality technology is gradually maturing, expanding human perception and changing product forms and service models. China is committed to achieving high-quality development and promoting the wide application of new technologies, new products, new formats and new models in various fields. China is willing to strengthen international exchanges and cooperation in the fields of virtual reality, share development opportunities, share innovation achievements, and strive to create a smarter and better future for human society.

It is hoped that all parties concerned will focus on the theme of the conference, strengthen exchanges, increase consensus, expand cooperation, and work together to promote the development of related industries to better benefit the people of all countries.

I wish the conference a complete success!