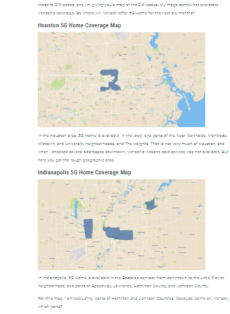 Except for a very few people in small parts of 4 cities (map at left and at PC Mag,)Mag,) Verizon will not sell you 5G until they get NR certified equipment. They are looking to Motorola and Samsung, who are both six months and more away from volume production.

After spending untold millions to be "first," Verizon has stopped opening 5G sites to customers. Hans Vestberg decided to wait until he could get 3GPP approved NR routers rather than those custom-built to Verizon's early standard.

On the financial call, Vestberg said

"When it comes to the 5G Home, we are so acknowledged, fully deployed in the 4 cities that we decided for. So what we're waiting for right now is the CP equipment for 5G Home. And as the industry is evolving, the first focus for the industry is actually to reduce chipset for smartphones. And then secondary, the next generation of chipsets comes on the CP side."

Hans' comment didn't rule out the possibility that Verizon would continue connecting customers with the Inseego CPE. However, Kevin King confirmed Sagan's story "Verizon can't expand its 5G Home coverage area until it can get hold of [5G NR routers.]" Expected vendors Samsung and Motorola are unable to deliver routers until the chips are ready.

Meanwhile, Verizon is building the most advanced network in the world. Almost all other carriers will be running 5G in low and mid-band. The millimetre wave Verizon is using is roughly 3 times as fast.

Some Verizon customers are getting around a gigabit although the company is only using 400 MHz of its 800 MHz spectrum. A Deutsche Telekom mid-band network in Warsaw runs at 350-500 megabits, lightly loaded.

NR adds little to performance below 2.5 GHz. It still doesn't support LAA and I believe has problems in using multiple 4G carriers. In other words, the "5G" T-Mobile and Verizon are touting will be slower than good 4G, except for Verizon millimetre wave. Here in Manhattan, T-Mobile has a 4G LTE/LAA cell delivering 500 megabits if you have the right phone.

I've recently discovered that the latency of the radios for the last 200 metres (the 5G NR) often is less important than the performance on the backbone. From the radio to the Internet typically takes 15 ms to 50 ms and more. 5G to the radio is now typically 10 ms, compared to 20 ms on LTE. That saves about 10 ms. The advantage will disappear with the new equipment from Ericsson & Huawei which brings LTE very close to the speeds of 5G.

A better backbone (or an Edge Cloud) can reduce latency from 10-30 ms. Today's routers are much more powerful and much faster. Like most incumbent telcos, Verizon's network was loaded with out of date equipment, some 20 years old. Most carriers are slowly replacing older gear. Verizon One Fiber is replacing almost everything.

Lee Hicks of Verizon is rebuilding that network with a goal of 5-15 ms. (That number is mine. Neither Lee nor anyone else at Verizon has discussed a figure. I'm inferring it from the capabilities of the equipment.) That will generally save 10-30 ms, more than the improvement with 5G radios.

One Verizon is delivering results. The new equipment "saves half" just in the first year. Overall, Verizon is reducing cost per bit by about 40% per year. As traffic growth slows towards 30%, margins are likely to expand.

The rebuild is producing an enormous impact on latency, although Verizon has never discussed the details. In addition, Verizon is deploying servers strategically throughout the network, often at aggregation points. They are using  Calix 40 gigabit NG-PON2 for backhaul with the EXOS operating system, about which I hear good things.

Deutsche Telekom has built a multi-tier network including servers from MobiledgeX, a subsidiary. They are getting 20-25 ms latency, the lowest reported on 5G. (Most won't answer a question.) Crown Castle/Vapor IO has started deploying even closer to the customer and may get 10-15 milliseconds.

I call Verizon's network the most advanced in the world because they are one of the few with much mmWave and are also rebuilding the backbone.