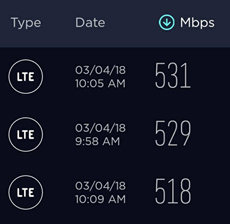 The newest LTE radios offer peak speeds up to 2 gigabits. With the right phone, you should receive 150-700 megabits down, occasionally more. These are lab results. Actual deployments are a year or two away. Huawei's BANDSpeed will increase that. BandSpeed also is a while away.

Today's best networks in the field peak at 750-1200 megabits. With the latest phones, you will often get speeds of 100-400 megabits and occasionally higher. These lab results suggest LTE speeds can go up 50% to 100% in the next few years.  Uploads are more likely to be 50-150 megabits, unfortunately.

At left are speed tests from PCMag editor Sascha Segan. He achieved over 500 megabits ar a T-Mobile cell site at 45th St. and Third Avenue in Manhattan, as you can see in the illustration. Today, tens of thousands of locations worldwide offer "peak" downloads of a gigabit.

There is little new technology needed for these speeds, just more channels and additional MIMO.

The Qualcomm X24 modem chipset is designed for speeds of 2 gigabits and was probably used in these tests. The specs are below, after the carrier announcements. Today's best networks mostly use 2-4 bands with 20 MHz of spectrum each. (CA - Carrier aggregation.) The X24 is designed to use up to seven bands, some LAA offering more megahertz. It also can support 4 antennas across 5 bands. (4x4 MIMO.) These features are well understood, are a natural evolution, and are in the standard.

Three carrier announcements and Qualcomm's information on the X24 here.

Singapore, 17 September 2018 – Singtel said today they have achieved peak LTE speeds of 1.5 Gbps using five-carrier aggregation[1]. This is the fastest in Asia and 50 percent faster than prevailing 1 Gbps speed.

Singtel will gradually deploy the new speed across the island as more spectrum bands are allocated for the LTE network. Smartphones supporting 1.5 Gbps speeds are scheduled to be launched in 2019.

“We are constantly investing in innovative technologies to boost network speeds, enhance coverage and expand capacity to give our customers the best network experience,” said Mr Yuen Kuan Moon, Chief Executive Officer, Consumer Singapore and Group Chief Digital Officer at Singtel. “As our customers’ lifestyles increasingly revolve around their smartphones, we do our best to ensure they enjoy fast, reliable, comprehensive and secure connectivity.”

The enhanced network speed was achieved in collaboration with Ericsson with a first-of-its-kind carrier aggregation of five carriers, which boosts network bandwidth. A combination of two 1800 MHz frequencies, together with 2100 MHz, 2600 MHz and TDD 2500 MHz spectrum bands and technologies such as FDD & TDD, 256QAM and 4X4 MIMO was used to achieve the peak speed of 1.5 Gbps. When introduced in the live network, such capability improves user experience and enhances network capacity. For instance, customers can download a two-hour 4K video in eight minutes.

“Ericsson has been a leader in pioneering technologies,” said Mr Martin Wiktorin, Head of Ericsson Singapore, Brunei & the Philippines. “By leveraging five-carrier aggregation across both FDD & TDD, we continue to lead the way to meet customers speed and capacity demands. We are proud to be working on new capabilities and advancements on LTE.”

Singtel and Ericsson will launch a pilot 5G network in Singapore in the fourth quarter of 2018. Singtel was recently named Asia’s Best Mobile Carrier by Telecom Asia and recognised by global metrics leader, Ookla, for having the fastest mobile network speeds in Singapore.

Telstra today also showcased the continued strength of its 4G technology through a demonstration of the new NETGEAR Nighthawk® M2 Mobile Router, with a live speed test revealing the 2Gbps#  peak speed capability of the device on Telstra’s mobile network.

“With the NETGEAR Nighthawk® M2 Mobile Router expected to be available in early 2019, we are gearing up to launch the world’s fastest 4G device on Australia’s fastest mobile network*.

“Hand in hand with our 5G rollout and supported by our network partner Ericsson, the 200 base stations we are enabling with 5G before the end of the year will also support peak speeds approaching 2Gbps# for enhanced 4G,” Mr Penn said.

Telstra recently announced it had started switching on 5G technology, making Australia’s largest and fastest* mobile network the first in the country to be 5G ready.  130 sites around Australia have now been 5G-enabled, with another 70 to be upgraded before the end of this calendar year. This series of network upgrades will not only make the Telstra Mobile Network 5G ready but is expected to deliver world leading 4G (LTE) speeds.

Telstra’s rollout of 5G is the culmination of our investment of around $8 billion in our mobile network over the five years to 30 June 2019 to enhance the capacity, capability and reach of Telstra’s network.

The demonstration in New York also used LTE Advanced feature, 256 QAM (enabling the network to deliver more bits of data in each transmission) and 4x4 MIMO (using multiple antennas at the cell tower and in the device to minimize errors and optimize data speeds.)  In mid-2018, Verizon announced these technologies were available in over 1,100 markets nationwide

Qualcomm products mentioned within this post are offered by Qualcomm Technologies, Inc. and/or its subsidiaries.

The excitement continues to build as we approach 5G launch in 2019. Qualcomm Technologies aims to put 5G smartphones in your hands by the first half of next year. In anticipation, operators are strengthening the Gigabit LTE foundation on which their future 5G networks will be built.

Gigabit LTE will provide high-speed coverage in areas where 5G signals aren't available and a consistency of experience for users of 5G devices that have Gigabit multimode capability, like those utilizing the Qualcomm Snapdragon X50 5G modem family. Additionally, Gigabit LTE improves network capacity and provides an enhanced mobile experience.

But blazing-fast, real-world download speeds alone do not explain the true significance of the Snapdragon X24 LTE modem. Featuring more combinations of LTE carriers, 4x4 MIMO configurations, and a higher number of total LTE spatial streams compared to previous generations, the Snapdragon X24 LTE modem will help expand the global Gigabit LTE coverage footprint by accommodating a much wider range of configurations in both licensed and unlicensed spectrum. The true power of the Snapdragon X24 LTE lies in its ability to help mobile operators fully mobilize their spectrum assets and maximize the capacity of their Gigabit LTE networks, while extending the capabilities of Gigabit LTE as the foundation for multi-mode 5G devices and networks.

The Snapdragon X24 LTE modem is packed with an array of other important features. It supports Category 20 LTE upload speeds of up to 316 Mbps, boosted by 3x20 MHz carrier aggregation and up to 256-QAM. Snapdragon X24 also offers additional capacity to mobile operators through support of Full Dimension Multi-Input Multi-Output (FD-MIMO), a Massive MIMO technology that is foundational to future 5G NR networks.

When can you get your hands on Snapdragon X24? We’ve already begun sampling it to our customers and we expect the first mobile devices powered by the Snapdragon X24 LTE modem to be available by end of 2018.