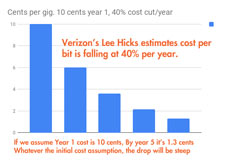 In 2018 & 2019, top execs at both Verizon and AT&T told me they were cutting costs by ~40%/year. Four years later, I can firm that the cost improvements are continuing. Massive MIMO is incredibly productive. Meanwhile, traffic growth is down to 15-30%. Result: cost per customer/month is falling in the 5G era. Margaret Vestiger at the EU and DT CEO say the opposite in order to justify demanding money from the Internet giants. This is not true. Dave, December 2022

Lee Hicks, Verizon Vice President - Network Planning, reiterated that Verizon has been reducing cost per bit by about 40% per year and expected to continue to do so. That corresponds to then-CEO Lowell McAdam's comment that mmWave would bring down the cost per bit by 9/10ths. Verizon's profit and loss confirms this general trend: costs and profits haven't changed much while traffic growth remains high. That would be impossible without a large increase in efficiency.

Traffic growth is falling towards 30%, according to the Cisco VNI. Unless capex falls, the glut of capacity without a market will get worse.

Verizon expects to save half by replacing ~200,000 old routers, etc. with new, more efficient, standardized gear. They are active in SDN/NFV, including some pioneering work. CEO Hans Vestberg said that 5G equipment prices are coming down so fast it can afford to cover "the whole country" in much less than ten years. (Comments like that usually mean 85% to 95%.) He hated the price drops when he was at Ericsson and loves them now that he is at Verizon. All telcos are seeing dramatic falls in costs.

The other U.S. and Canadian telcos are also seeing a decline. The implications include:

Thanks to Adtran, who covered my expenses to hear Lee and others at Adtran Connect

Follow-up story: To achieve these savings, Hicks is replacing ~200,000 major pieces of equipment, especially routers. He is consolidating Verizon's several networks into one, which will require far less hardware and space. He expects to save half from the beginning. Savings will get larger from there.