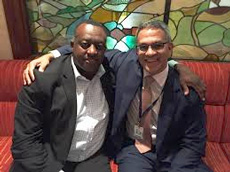 Pulmonary embolism at age 52 strikes down master of software-defined radio and low power rural wireless. How can you bring mobile to the hundreds of millions of Africans who live away from the power grid? Vanu Bose for a decade has been working to build inexpensive wireless systems that can run on solar power. His company, Vanu Inc., has developed extremely low power radios now deploying in Rwanda. They were the first to achieve FCC certification for software-defined networks.

Vanu played a crucial role in the White House PCAST report, which set sharing as the primary goal for U.S. spectrum policy. With backing from Craig Mundie of Microsoft and Eric Schmidt of Google, PCAST destroyed the myth that monopoly spectrum was still necessary. It was also influential at OFCOM and the EU.

He was a member of the U.N. Broadband Commission, the most distinguished body developing world broadband policy. It's led by Paul Kagame and Carlos Slim and was a showcase for Hamadoun Toure.

I was honored to be part of an informal discussion on the practical delivery of broadband to the most rural parts of the world, where Vanu was a strong voice.

One of his last acts before he died last fall was to donate wireless base stations to Puerto Rico. His death in November was actively covered in the Boston press and the NY Times, but not reported in the telecom press. I missed it myself, so I'm writing this belated note.

His father, Amar Bose, was an MIT Professor for 50 years who had a sideline building exceptional audio speakers.

Vanu Bose ’87, SM ’94, PhD ’99, a leading software executive and a member of the MIT Corporation with deep ties to the Institute, died on Saturday at age 52. The cause of his death was a sudden pulmonary embolism.

Bose was the founder and CEO of Vanu, Inc., an innovative firm that provides wireless infrastructure globally and was the first company to receive certification for software-defined radio from the U.S. Federal Communications Commission.

The firm’s technology, emerging from Bose’s graduate research at MIT, increases the role of software in operating the radio-based component of wireless communications networks, including those used for cellphone communications. Among other things, the technology enables multiple networks to operate on the same devices.

Vanu, Inc. has also developed cellular antenna systems that require relatively small amounts of energy and can run on solar power. The reduction in power needed for these networks has allowed the firm to help build out networks in rural areas around the world, from India to Rwanda to Vermont, and to address what Bose called the “great need for communication” in those areas.

Bose also recognized the humanitarian possibilities of the technology, and put the company to work this fall providing urgent help in hurricane-struck Puerto Rico. Vanu, Inc. is providing over 40 cellular base stations in Puerto Rico, some of which have already helped people find their missing families.

“That makes it all worthwhile, right there,” Bose told Boston’s WBUR radio in October.

Bose had lifelong ties to MIT, growing up around the Institute in an environment filled with faculty, students, and alumni. His father, the late Amar G. Bose, was a professor in MIT’s Department of Electrical Engineering and Computer Science (EECS) for nearly a half-century. Amar G. Bose also founded the Bose Corporation in 1964 and was one of the most committed benefactors the Institute has seen.

“The ‘Bose’ name has long been synonymous with brilliance, humility, leadership, and integrity,” says MIT President L. Rafael Reif. “Through his work to use cellular technology to connect the unconnected — most recently, in Puerto Rico — Vanu embodied the very best of the MIT community, advancing the Institute's vision for a better world. He was deeply proud of his father, Amar, and of Amar's impact as an engineer, entrepreneur, and executive. And he built an extraordinary legacy of his own that I know made Amar proud.”

Reif added: “On behalf of MIT, I send my deepest condolences to Judy, Kamala, Prema, Maya, Ursula, and the entire Bose family.”

Bose’s doctoral thesis, titled “Virtual Radio Architecture,” was supervised by professors John Guttag and David Tennenhouse. Bose’s graduate research came to form the basis of Vanu, Inc., which he founded in 1998, even before Bose had fully completed his PhD work — but after it had become clear that his work had the potential to move the industry forward.

As a life-long participant in the open, collaborative intellectual atmosphere around MIT, Bose came to appreciate the way MIT alumni who founded companies would stay connected to the Institute and pass on their own insights and pieces of wisdom to students and researchers in the community.

“I think it’s a unique part of the MIT experience that there are not only so many great founders around, but that they make themselves accessible,” Bose told the EECS Connector, an alumni publication, in 2015.

As a company founder and alumnus himself, Bose made sure to continue the tradition of working to support new generations of MIT researchers. At the time of his death, he was engaged in fostering and guiding the Bose Fellows Program at MIT, an initiative founded in 2014 that gives grants of up to $500,000 for three years, to let faculty members pursue bold, cutting-edge research programs.

“My father would be very happy with the innovation and freedom of exploration that these grants have made possible, as it was exactly what he was all about,” said Bose in 2016, when announcing the latest group of grant recipients. “The awards acknowledge the spirit of insatiable curiosity that my father embraced.”

Vanu Bose also served on the advisory board of the Bernard M. Gordon-MIT Engineering Leadership Program, an initiative that adds leadership education to the engineering skills of MIT undergraduates.

And from 2013 onward, Bose served as a member of the MIT Corporation, the Institute’s board of trustees.

“We are all shocked to lose Vanu Bose, a warm and valuable member of our community,” says Robert B. Millard, chairman of the MIT Corporation. “And our hearts go out to Vanu’s family, which has been such an indelible part of MIT.  We've really lost a beautiful human.”

In turn, Bose’s MIT activities were only part of a larger set of civic responsibilities he assumed during his career. Bose was a member of the Board of Trustees for the Boston Museum of Science from 2007 through 2013, helping steer it through a period of growth and development. He also served on the United Nations Broadband Commission for Digital Development, from 2012 through 2015.

In his professional career, Bose also served the Bose Corp. as a member of its Trustee Succession Committee.

Bose won a number of awards and honors in his professional career, including IEEE Spectrum magazine’s “Wireless Winner” in 2007, and the GSM Association Technology Award for Most Innovative Infrastructure Product. He was also named a World Economic Forum Technology Pioneer.

Vanu Bose is survived by his wife, Judith, his daughter, Kamala, his mother, Prema, his sister, Maya and his father's wife, Ursula.

A celebration of Vanu’s life will take place on Saturday, Nov. 25, at 10 a.m. in Room 26-100 (50 Vassar Street). Complimentary parking will be provided for guests in the Stata Center Garage, 32 Vassar Street.