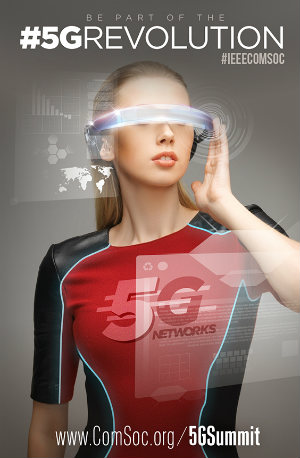 Korea Telecom and NTT in Japan want to put millimeter to work in 2018. Incumbent telcos see high frequency networks as a trump card against competition. Range is short and millimeter will require many small cells. Only incumbent telcos are likely to have enough fiber for the backhaul.

Ted Rappaport, the conference chair, has just published Millimeter Wave Wireless Communications with Robert Heath, also speaking. It will be the standard text. Rappaport's teams have been testing 28 GHz across Manhattan and Brooklyn, very tough areas for wireless. The success of his testing is one reason the industry is confident "5G will work."

Networks using millimeter waves such as 28 GHz just may be able to reach 10's of gigabits.

2) MIMO uses many small antennas to dramatically increase wireless performance. 4 antenna MIMO is at the heart of the new gigabit WiFi and 8 antenna WiFi is soon to come out of the labs. Ericsson has a remarkable video of a van with an 8 antenna MIMO test rig driving around Stockholm. Speeds reached 800 megabits.

Heath built one of the first MU MIMO testbeds at the University of Texas. I believe he was the first Ph.D student of Stanford's A.F. Paulraj, who invented MIMO in 1993. As noted above, he's an author on the new millimeter wireless book.

3) Bottoms-up WiFi small cells, working together, are the most intriguing of the three paths. France is showing the way, with over four million home gateways creating wireless networks that consumer prices are half that of the United States. Germany & England are fast piling on. From an engineer's point of view, the right way to build networks because the effective cost per bit is much lower. Towers aren't eliminated and will always be required at locations with limited WiFi, but the volume of tower traffic can be dramatically reduced.

I call this "bottoms-up" but the cable company's term "WiFi First" is more popular. More use of WiFi represents an existential threat to the current business models of most phone companies. They count on substantial usage charges that would be dramatically reduced. Crippling WiFi could be enormously beneficial to phone companies. The harm to WiFi is one reason Verizon and allies are trying to ram LTE-U/LAA into use before it's ready. They are hoping to establish "facts on the ground" before regulators stop them.

At the first Brooklyn Summit I asked about competition problems for 5G networks based on high frequencies. They generally require fiber backhaul to an enormous number of small cells because of the limited range. The incumbent has an enormous advantage because of all the fiber they own. Stanford's Andrea Goldsmith, one of the best, answered by pointing to the alternative of Bottoms-up networks, supplied through existing DSL and cable backhaul. She was so on target I apologized to her for asking a simplistic question.

The 5G Summit is primarily a technical event but it's time for the policy people to begin listening.

Nokia Networks and the NYU WIRELESS research center at the Polytechnic School of Engineering at New York University are jointly organizing the second Brooklyn 5G Summit in Brooklyn, NY on April 8 - 10, 2015. The 2nd summit will build on what was achieved last year and will focus on spectrum assets above 6 GHz and progress in channel modeling at these higher frequencies. Further, Massive MIMO and Beamforming solutions for 5G systems will be a focus topic for this summit.

The 2015 Brooklyn 5G Summit brings together wireless/mobile industry R&D leaders in academia and business to explore the future of 5G wireless. This 2nd event is an annual forum to discuss trends, aimed at discovering “what´s hot and what´s not”, and what will be the best ways to take the first steps towards understanding and framing the world’s 5G wireless technology.

Scott F. Migaldi is a Research Scientist and Member of the Technical Staff at the Sprint Corporation.

Scott leads standards efforts on technology trends and next generation wireless systems. Scott is a member of the 3GPP RAN standardization group within the CTO organization.  END_OF_DOCUMENT_TOKEN_TO_BE_REPLACED

Michael Ha is the Deputy Chief of Policy and Rules Division, Office of Engineering and Technology at the Federal Communications Commission. Since joining the Commission in 2010, he has led various technical analyses for spectrum allocations in advanced wireless services, mobile satellite services, and public safety services. He has also been engaged in federal/non-federal spectrum sharing activities and the Commission’s efforts to explore the use of innovative technologies in upper microwave and millimeter wave bands.  END_OF_DOCUMENT_TOKEN_TO_BE_REPLACED

At CableLabs Dan is the executive responsible for the Network Technologies R&D department including wireless, HFC, optical technologies, SDN, NfV and Internet Protocols for residential and commercial services. He is responsible for strategy, execution, and technology transfer including co-innovation and development with vendors, universities and industry forums. The DOCSIS™, Wi-Fi and PacketCable™ programs from the Network Technologies team have fundamentally driven global broadband and telecommunication economics and adoption.  END_OF_DOCUMENT_TOKEN_TO_BE_REPLACED

Dr. Collins received a B.S. in Engineering Science from The Pennsylvania State University and both an M.S. and Ph.D. in Bioengineering from The University of Pennsylvania. His primary interest is in the engineering and safety of electromagnetic fields where they interact with the human body, which led him to a career in Magnetic Resonance Imaging (MRI) research.  END_OF_DOCUMENT_TOKEN_TO_BE_REPLACED

Dr. Sodickson is Vice-Chair for Research in the Department of Radiology and Professor of Radiology, Physiology & Neuroscience at New York University School of Medicine. Since 2007, he has headed the Bernard and Irene Schwartz Center for Biomedical Imaging (CBI) at NYU School of Medicine, and he serves as Principal Investigator for the newly established Center for Imaging Innovation and Research (CAI2R), an NIH-supported Biomedical Technology Resource Center devoted to the development and dissemination of new technologies and new collaboration models for oncologic imaging, musculoskeletal imaging, and neuroimaging.  END_OF_DOCUMENT_TOKEN_TO_BE_REPLACED

Charlie Zhang is currently a senior director and the head of Wireless Communications Lab with Samsung Research America at Dallas, where he leads technology development, prototyping and standardization for Beyond 4G and 5G wireless systems.  END_OF_DOCUMENT_TOKEN_TO_BE_REPLACED

His Professional work started at IBM, who was responsible for communications standards, in year 1990 and a Visiting Professor at the Duke University through year 2000.  END_OF_DOCUMENT_TOKEN_TO_BE_REPLACED

Robert W. Heath Jr. received the Ph.D. in EE from Stanford University. He is a Cullen Trust for Higher Education Endowed Professor in the Department of Electrical and Computer Engineering at The University of Texas at Austin and is a Member of the Wireless Networking and Communications Group. He is also the President and CEO of MIMO Wireless Inc.  END_OF_DOCUMENT_TOKEN_TO_BE_REPLACED

Professor of electrical and computer engineering with the University of California

Jim Buckwalter is Professor of electrical and computer engineering with the University of California – Santa Barbara.  END_OF_DOCUMENT_TOKEN_TO_BE_REPLACED

END_OF_DOCUMENT_TOKEN_TO_BE_REPLACED

Jerry Pi is the Chief Technology Officer of Straight Path Communications Inc., a leading communication asset company with one of the largest 28 GHz and 39 GHz spectrum portfolios in the United States. He leads the mobile communication technology strategy and R&D that maximize the value of these spectrum assets.  END_OF_DOCUMENT_TOKEN_TO_BE_REPLACED

Katsuyuki Haneda received the Doctor of Engineering from the Tokyo Institute of Technology, Tokyo, Japan, in 2007. Dr. Haneda is presently an assistant professor in the Aalto University School of Electrical Engineering.  END_OF_DOCUMENT_TOKEN_TO_BE_REPLACED

Gerhard P. Fettweis earned his Ph.D. under H. Meyr’s supervision from RWTH Aachen in 1990. After one year at IBM Research in San Jose, CA, he moved to TCSI Inc., Berkeley, CA. Since 1994 he is Vodafone Chair Professor at TU Dresden, Germany, with 20 companies from Asia/Europe/US sponsoring his research on wireless transmission and chip design. He coordinates 2 DFG centers at TU Dresden, namely cfaed and HAEC.  END_OF_DOCUMENT_TOKEN_TO_BE_REPLACED

Tom is responsible for planning the evolution of the AT&T U-verse product, mobility core, radio access roadmap, wireless device requirements and certification, and the technical solutions for AT&T’s products and services.   END_OF_DOCUMENT_TOKEN_TO_BE_REPLACED

Michael Ha is a Deputy Division Chief with the Office of Engineering and Technology (OET) at Federal Communications Commission. Since joining the Commission in 2010, he has lead various technical analyses for spectrum allocations in advanced wireless services, mobile satellite services, and public safety services.  END_OF_DOCUMENT_TOKEN_TO_BE_REPLACED

Lauri Oksanen is the Vice President of Research and Technology. With over 25 years of extensive experience in the telecommunications industry, he is responsible for the development of new technologies at NSN. Lauri started his telecoms career at Nokia Cables in 1988, where he developed the quality system for the unit and managed research and development in the area of fiber optics. END_OF_DOCUMENT_TOKEN_TO_BE_REPLACED

Sundar Subramanian received his M.S. and PhD degrees from the University of Texas at Austin in Electrical and Computer Engineering. His areas of expertise include scheduling and networking techniques for heterogeneous networks and PHY/MAC algorithms for cellular and mobile communications.  END_OF_DOCUMENT_TOKEN_TO_BE_REPLACED

Mikael Höök received his M.Sc. Degree in Electronic Engineering from the Royal Institute of Technology in Stockholm. He has 19 years of experience in the areas of research and standardization of wireless technologies.  END_OF_DOCUMENT_TOKEN_TO_BE_REPLACED

Head of the Wireless Communications and Networks Department at Fraunhofer HHI

Thomas Haustein received his the Dr.-Ing. (Ph.D.) degree in mobile communications from the Technische Universität Berlin, Germany, in 2006. In 1997, he joined the Fraunhofer Heinrich Hertz Institute, Berlin, where he worked on wireless infrared systems and radio communications with multiple antennas and orthogonal frequency division multiplexing.  END_OF_DOCUMENT_TOKEN_TO_BE_REPLACED

Takehiro Nakamura joined NTT Laboratories in 1990. In 1992, he transferred to NTT DOCOMO, Inc. He is now VP and Director of the Radio Access Network Development Department of NTT DOCOMO, Inc. Mr. Nakamura has been working for research and development of the W-CDMA, HSPA, LTE/LTE-Advanced and Future Radio technologies.  END_OF_DOCUMENT_TOKEN_TO_BE_REPLACED

Preben Mogensen received the M.Sc. and Ph.D. degree from Aalborg University, Denmark, in 1988 and 1996 respectively. He has since 1988 worked in various positions at Aalborg University; since 2000 as Professor in mobile communication systems.  END_OF_DOCUMENT_TOKEN_TO_BE_REPLACED

Hossein has over 25 years of international experience in the Information Technology and telecommunications industries with proven expertise in driving technology strategy and architecture to ensure growth and profitability. He is known to have an in-depth understanding of the business context of the ICT sector, bringing a high level of customer focus and innovation to Nokia Networks. END_OF_DOCUMENT_TOKEN_TO_BE_REPLACED

Dr. Peiying Zhu is a Huawei Fellow and Senior Director of North American Wireless Research and Standards. The focus of her research is advanced wireless access technologies for LTE/LTE-A and beyond. She is currently leading 5G wireless system research in Huawei.  END_OF_DOCUMENT_TOKEN_TO_BE_REPLACED