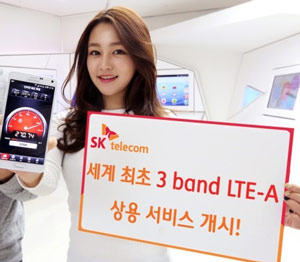 Realworld likely speeds of 50-150 megabits 90+% of the time. Two 20 MHz bands will deliver speeds like this. You rarely will need that kind of speed but higher capacity wireless means more bandwidth for all. The 2 gigabyte and 5 gigabyte caps need to disappear and they will where there's enough competition. 55% of Singapore is covered now and they'll be close to 100% next year.

Update 3 September: Vodafone in Spain announced a similar 300 megabit (shared) deployment rapidly going countrywide. By December, Voda will have 4G to 100% of Spanish towns of 25,000 or higher.

Rwanda will soon be supporting 750 megabits, as they build a network that can aggregate 5 carriers. The Africans look to leapfrog the west as they have plenty of spectrum available. There are very, very few phone wires in sub-Saharan Africa so the service will be wireless and they intend to make it efficient.

Will the iPhone 6 access 300 megabits, shared, when it comes out next week? Does anyone need 100's of megabits on mobile, especially if you blow out your cap in five minutes? Will Verizon match the speed, now that they've upgraded the network? Why does Singtel advertise 300 megabits when the Koreans rate the same service only at 225 megabits? Who knows, and of course they aren't delivering those speeds throughout the cell site.

Very few applications pull even 20 megabits. HD TV runs fine in 5 megabits and 4K TV will come down from the current 15 megabits. The actual loads on the networks will leave enough room for 100 megabits when you want it most of the time. There is a great deal more to come soon, into the shared gigabits. I've previously reported Stanford's Andrea Goldsmith believes speeds can be 50-100 times faster in the next 5-10 years. I asked Vint Cerf whether that was realistic and he agreed that's the likely technical path.

The first phones are from Samsung at prices similar to the iPhone. I also saw the low end Xiaomi for about $150, but the current models are limited to 150 megabits. Xiaomi is also starting to sell in Indonesia and India. Soon we'll all have to learn how to spell Xiaomi.

The iPhone 6 will have to be truly wonderful to sell the 80M or so Apple has ordered.

Vodafone Spain announces the commercial deployment of "LTE Advanced" (LTE-A), which enables speeds up to 300 Mbps in download, doubling the capacity of data transmission in 4G network.

Santander, Tuesday 2 September 2014. Vodafone Spain announces the commercial deployment of "LTE Advanced" (LTE-A), which enables speeds up to 300 Mbps in download, doubling the capacity of data transmission in 4G network. The service will be available in October in the cities of Madrid, Barcelona and Valenciay service to other cities will be progressively extended.

Moreover, the operator has added to its network's "Voice over LTE" (VoLTE) technology and is testing different points of the Spanish geography. Voice over LTE can enjoy voice calls in High Definition (HD Voice) with times of less than one second establishment and opens the door to advanced and interoperable multimedia services that facilitate communication and collaboration while the call is performed voice.

Vodafone Spain announced commercial deployment in October "LTE Advanced" (LTE-A) will be available in October inMadrid in Barcelona and Valencia and the rest of the service will be progressively extended ciudades.LTE Advanced is the evolution of LTE or 4G in its first phase allows increased bandwidth LTE to offer speeds up to 300 Mbps data download and place the operator in the forefront of technology in the fourth generation mobile networks to launch level mundial.Este accompany the introduction of new smartphones that let you enjoy the new speeds of broad band flash Vodafone.The first of the new generation smartphone (category 6) will be an exclusive edition of the Samsung Galaxy S5 support LTE-A networks.

The deployment of network will be using bands 1800 MHz and 2600, when the band 800 is available, enable its availability in more environments. For higher data download speeds - With LTE-A the ability of different LTE frequency bands-which is called "carrieraggregation" add. So far, the fastest speed was 150 Mbps.

Vodafone Spain had already done pilot "LTE Advanced" (LTE-A) in Madrid last December with speeds up to 300 Mbps downloading data, prior to the availability of commercial service today announced step.

Additionally, Vodafone Spain announces that it has incorporated into its network of technology "Voice over LTE" (VoLTE). This service allows you to enjoy voice calls in High Definition (HD Voice) with times of less than one second establishment and opens the door to advanced and interoperable multimedia services that facilitate communication and collaboration while they realizala voice call. Thus, utilizarservicios video call, instant messaging, video streaming HD or 4G navigation can be during the call.

VoLTE can offer higher quality, shorter and possibility to develop complementary services data communications voice over 4G, with the simplicity of use of a mobile call. During the tests that have been conducted, it has been shown great improvement in the experience of using the 4G network that allows the new technology.

Voice over LTE technology will disponiblecomercialmente in the coming months.

Vodafone was the first company to launch 4G services in Spain in May 2013 in 4G coverage currently reaches more than 619 municipalities, among which are the 80 cities with over 70,000 inhabitants, all provincial capitals, the autonomous cities of Ceuta and Melilla and the tourist areas. In December will be filled with 100% 4G coverage all cities of over 25,000 inhabitants. On the other hand, already have 4G areas with high traffic density: 12 airports, railway stations 7, 32 spaces for large events, 20 football stadiums and ski slopes, among others.

Vodafone 4G opens up innovative services and applications, facilitating the sharing and downloading files like photos, music, or high-definition audiovisual content and allowing to make the most of online video games. Vodafone 4G facilitates the introduction of new services in the business area or public administration, and business mobility applications with high multimedia content or other areas that have not fully been explored such as telematics, health and public services.

Vodafone Spain is part of the Vodafone Group, one of the largest telecommunications companies in the world by revenue with a presence in 26 countries across 5 continents and 52 other agreements worldwide. Vodafone provides a full range of unified telecommunications services, including voice, mobile data and fixed broadband access to more than 436 million customers at 30 June 2014. 13,230,000 mobile customers and 1,074,000 fixed broadband Vodafone Spain benefit from the experience and capabilities of a leading global company that helps its customers - individuals, businesses and communities - to be better connected in the world of communications. For more information, please visit: www.vodafone.es

Mr Tay Yeow Lian, SingTel’s Managing Director of Networks, said: “From streaming videos to web surfing and uploading selfies, customers are doing more with their smartphones. With this launch, SingTel customers will be the first in the world to enjoy the benefits of the fastest phone on the fastest network.”

“We are constantly enhancing our networks with the latest technologies to provide our customers with the best possible experience for today’s increasingly bandwidth-hungry applications,” he said.

Network now covers more than half of Singapore

SingTel has been working with its mobile network equipment provider, Ericsson, to rapidly expand its 4G LTE-Advanced network across Singapore.

Street level coverage now extends to more than 55 per cent of the island, including areas such as Orchard, the CBD, Shenton Way, City Hall, Ang Mo Kio, Tampines, Jurong, Telok Blangah and Woodlands.

Mr Tay said: “We have accelerated our network roll out programme and are on track to achieve nationwide outdoor coverage by the first quarter of 2015.”