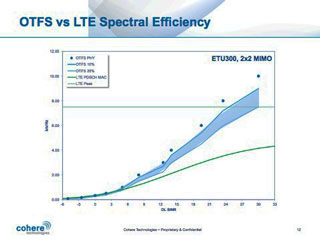 Some claims to be proven but respected telcos think they have something. Engineers at five major phone companies think Cohere's OTFS modulation may significantly improve performance in MIMO systems, including most of 5G. At 3GPP, AT&T, China Mobile, Deutsche Telekom, Telefonica and Telstra co-authored 3GPPP proposals with Cohere and urged 3GPP to study it closely.  R1-162929.zipR1-162930.zipR1-162931.zip  These were expressions of interest, not full endorsements. Only Telstra discussed field testing.

EE Times, yet again, has by far the best reporting. Rick Merritt heard from China Mobile's expert, Chih-Lin I, “We co-signed with Cohere because we need to bring in new blood and have new flexible thinking. For me, the most interesting part is their high mobility for hitting the goal of service at 500 km/hour, which we want for our high speed railways

—I have not seen anyone else show how that would work, so Cohere was refreshing,”  Cohere believes fast movement will not impede the service.

Cohere's chart below speaks of "Delay-Doppler Impulse Response." They look at the timing of each channel and use the data to "characterize the channel." This is particularly important when the channel quality is limited, whether the problem is the motion of the receiver or the lack of line of sight.

In the chart at right, the dots on the chart at the right represent the physical layer throughput of OTFS.  The blue is what they measure after all overhead is accounted for. The green line at bottom is Cohere's take of the performance of current, OFDM, coding. Note that the gap between the OTFS and the predicted current results becomes much wider as the quality of the signal diminishes to the right. The blue is what Cohere believes they can achieve. The difference is modest with a good signal such as

line of sight. Cohere thinks they do much better, even twice the performance, on some lower quality signals.

I strongly doubt that Cohere's new RAT modulation, "delivers 100 percent coverage, 10x spectral efficiency, and a 50 percent cost savings over existing solutions by perfectly capturing the wireless channel," as they claim. A 10X improvement in spectral efficiency implies that the alternative methods are 90% inefficient. That's not so for the systems I know, 2x2 & 4x4 MIMO. The 96 antenna Facebook system and the 128 antenna EU/Bristol system appear to do much better than that.

CEO Shlomo Rakib believes the 10X will prove out with very large antenna arrays; there's no way to test that yet. I can understand a new company puffing things up a little to get noticed, but the telco support has now put them on the map. Even a 10% improvement in efficiency would be worth $billions.

There is certainly room to improve the signaling arrays. Facebook expects at least a 40% improvement in what their MU MIMO rig can transmit. We are far from Shannon Law limits.

Merritt pointed to the opposition a new modulation scheme must overcome. "Nokia, Alcatel-Lucent and others are promoting a generalized or universal filter band approach using guard bands to protect and thus make better use of adjacent channels. Huawei and others favor a sparse code multiple access, and Qualcomm has sketched out a third approach."

With $Billions of royalties at stake, technical merit is not enough. Merritt quotes an anonymous senior executive. "The decisions are rarely technically oriented, there’s a lot of IPR, political and business considerations. There are lots of ODFM variants being proposed…it’s an alphabet soup.” Alcatel last year told me they thought they had an agreement with Huawei for a joint proposal and to split the royalties. Apparently that's not so. Qualcomm is also trying hard.

One more reason 3GPP must become multi-stakeholder with a public presence. 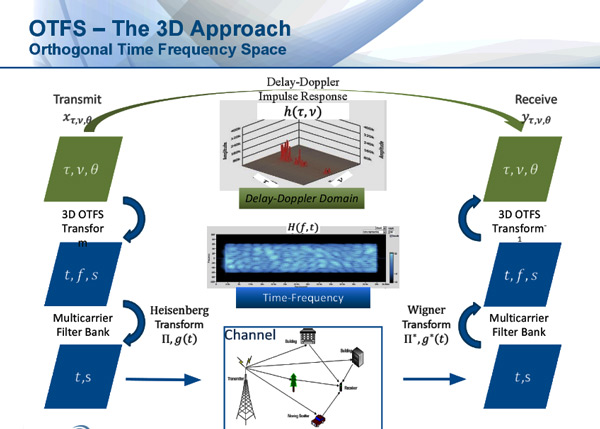