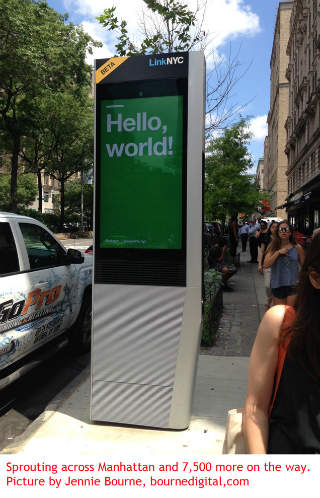 “They're on!” The irrepressible Jennie Bourne wrote me when she connected to one of the first of 7,500 free Gigabit Wi-Fi kiosks here in New York. They are thin, fast, and attractive. Wi-Fi capacity is now 10x what it was a few years ago. The once marginal offering is now robust.

Most of us have Wi-Fi at home and work; add a network like this and you'd rarely need to use expensive LTE bandwidth unless you are out driving. That's great for consumers, frightening for telcos and their stockholders. LinkNYC is crucial to NY's plan to connect everyone. To protect Wi-Fi, City Counsel Maya Wiley has become a player in 3GPP & IEEE standards. See 8,550,405 New Yorkers: Protect WiFi from LTE-U/LAA. LinkNYC is working far below -72 dBm and 3GPP threatens that. Today's WiFi can work at -72 dBm and even -90 dBm

How fast is it? Miles Green writes, "We returned from a week long vacation and found that it took about three hours for our trip photos to upload to iCloud via our home cable internet service. That same transfer made on a LinkNYC connection was able to complete in about two minutes." The network isn't loaded yet and Green is a company engineer, but I think you get the point.

I believe it is stupid not to build a Wi-Fi network like this in almost every city, whether public or private. It's almost always the right choice from the point of view of a network architect. 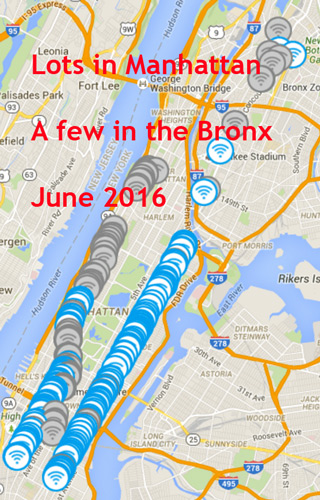 The sooner you get the bits to a landline, the cheaper the network will be, Bill Smith of AT&T taught me several years ago. 70-90% of cellphone data already goes straight to Wi-Fi. A build like this can probably cover the majority of the remainder demanded in dense areas. That's where carriers have the most need for capacity.

Consider Australia, where they are building a National Broadband network with fiber, cable, and DSL. It's had a rough few years but may be coming together. If they put kiosks like this wherever they could, they effectively double the spectrum. Consumers would save a great deal of money. The companies can save the investments in more towers. It wouldn't be that expensive because they are already tearing up the streets to put in fiber. Politically impossible, I think, but from a technical point of view the right thing to do.

I believe "bottoms-up," Wi-Fi First networking can deliver bits at a fraction of the cost of wireless towers in most cities. Wi-FI is now built into every phone; the LinkNYC stations can do most of what people need on the go. LTE towers will still be necessary but most of the traffic will go Wi-Fi. French networks are being built this way, one reason wireless in France costs about a third of what it does here. Bottoms-up, especially from home gateways, probably halves the cost of a wireless network and eliminates spectrum shortages.

New York's network is being paid for by advertising and related services. It's completely privately funded and even returning a profit to the city. The city, under Maya Wiley, put out a request for proposals and chose this one. There's some silliness about a "public-private partnership" because that's a popular buzzword. It's a private venture with ordinary city regulation. PPP's sound good but many are scams and failures.

A government run program can be very effective, as Chattanooga and Hamburg prove. Other muni builds have been disasters, including Burlington and Provo. Often, the ones that work well have existing municipal utilities; the disasters were often led by a team with little network building experience. This should be a practical decision, not an ideological one.

In some mostly rural areas, no company is willing to come in without a big subsidy. Low density areas rarely have substantial competition; the few with the right facilities often extort the subsidy program. The U.S. Broadband Stimulus probably wasted more than half the $7B. The recipients of the Connect America funding have been bragging to Wall Street how much of the money goes to profit, not building broadband. The English newspapers have reported that BDUK billions were squandered. India's universal service fund has produced almost nothing. Hillary Clinton's team has a naive idea of throwing money at the problem.

The best approach I've seen is to require the buildout from a company spending their own money and keeping costs down. I call that "Kurth Solution," named for the German regulator who made this work for broadband to the "white spaces" on the map. The companies bidding for 4G spectrum were required to build in the white spaces before they could build the profitable cities. Vodafone and Deutsche Telekom delivered extremely quickly while keeping spending down. Of course they lowered their auction bid, but WIK Consulting, the top German firm, calculated the reduction was very modest. It was certainly much less than the companies would have demanded as a subsidy.

New York actually did something similar, if the rumors are true. The company initially wanted to hold off on the less profitable parts of town. Maya Wiley said no deal until they expanded the buildout.  They didn't agree to the whole city but are going to all five boros.

There are issues, of course. Privacy problems were noted by the NYCLU and NY Mag. They did affluent, commercial areas first but are now expanding. Many areas are not on the map below, disproportionately the poorer areas. Smart regulation will be very important solving these.

""Connectivity for everyone" has been Bob Frankston's call for 15 years. 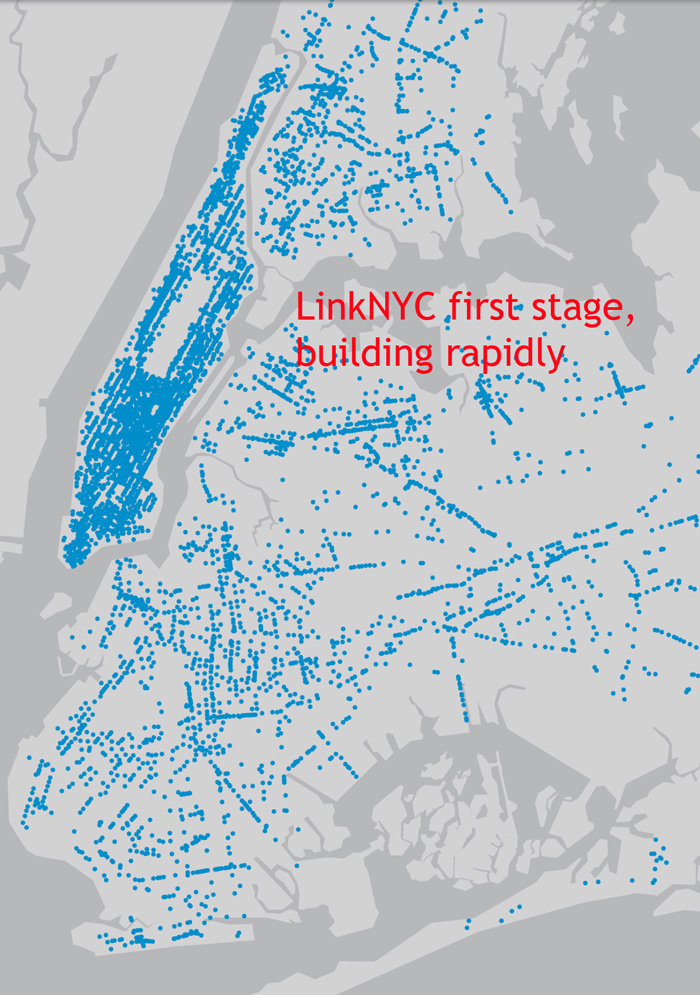 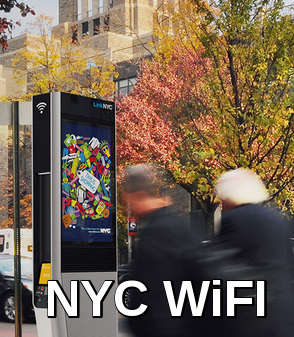 Mayor's Counsel Maya Wiley throws a monkey wrench at 3GPP, IEEE, and FCC. 7500 free gigabit Wi-Fi kiosks are sprouting around New York City. The city expects they will allow many unconnected New Yorkers to go online, despite the high prices of Verizon and the cable guys.

Why buy an expensive wireless plan if you can connect via WiFi in home, office, and most of the city? Playing defense, Verizon has mounted a multi-million dollar campaign to divert much of the WiFi spectrum to the four big wireless carriers. The carriers could easily absorb half the Wi-Fi bandwidth using the wide 40 MHz channels. Counsel Wiley writes:

"New York City is committed to ensuring digital inclusion of all our residents, no matter their zip code or income. … Therefore, the city has embarked on an aggressive effort to achieve universal broadband for all New Yorker. … WiFi is a central part of this effort and any technological interference with our ability to deliver free and affordable wireless access to our residents is of grave concern.

"Even a modest loss of coverage for a WiFi hotspot, when multiplied and magnified over the scale of New York City, could affect millions of users daily and decrease the value of hundreds of millions of dollars of public and private investment. WiFi is the most available and affordable wireless broadband technology. Clearly, any threat to Wi-Fi is a threat to the very fabric of the city."

Full letter below or at the IEEE. The most immediate change indicated is to protect weak signals from interference. Details.

Wiley is a political heavyweight, with 20 years of experience as a civil rights advocate. Besides the FCC, she sent the note to Satoshi Nagata and Dino Flores at the IEEE. Flores should have stepped aside on LAA because his company, Qualcomm, hopes to make $billion or more in royalties. Instead, Flores is the lead spokesman for 3GPP on LAA. Nagata, a thoughtful engineer, works for NTT DOCOMO, which tries to avoid controversy.

At the FCC, the city targeted Gigi Sohn, the influential special counsel to the FCC, long a fighter for consumer interests; Walter Johnston of the Office of Engineering, who keeps a low profile but is respected and extremely well-informed;  Ed Smith and Jonathan Wilkes. Word is getting around the FCC that giving Verizon so much free spectrum reduces their incentive to bid in the coming auction and directly hurts the U.S. Treasury

3GPP is a corporate-only group where the industry leaders get together to set the rules for the rest of us. The engineering work on LTE has been exceptional. Unfortunately, they have no mechanism to incorporate the public interest or the needs of the developing world. I can offer many examples. 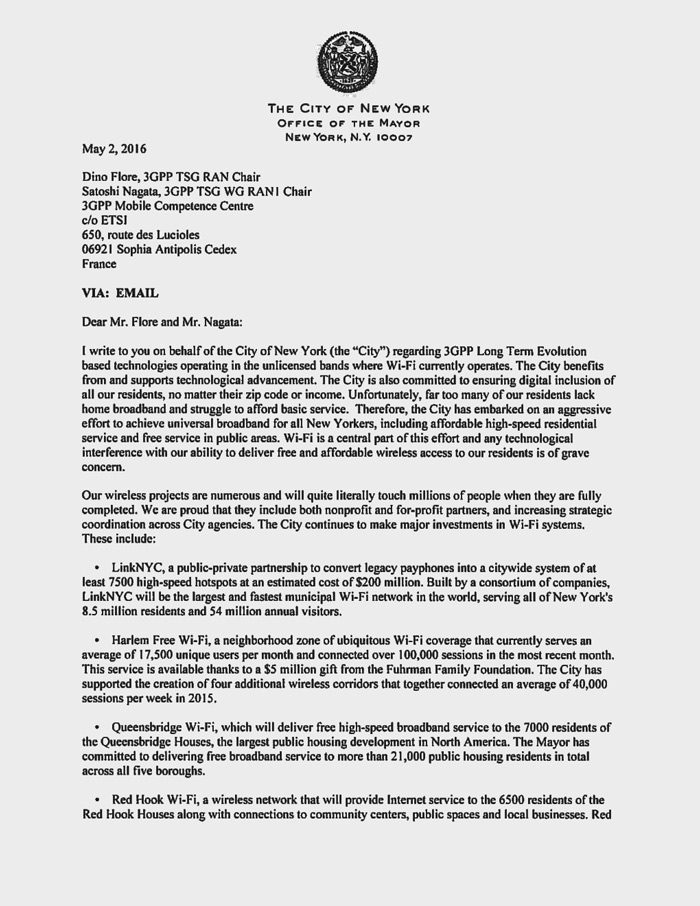 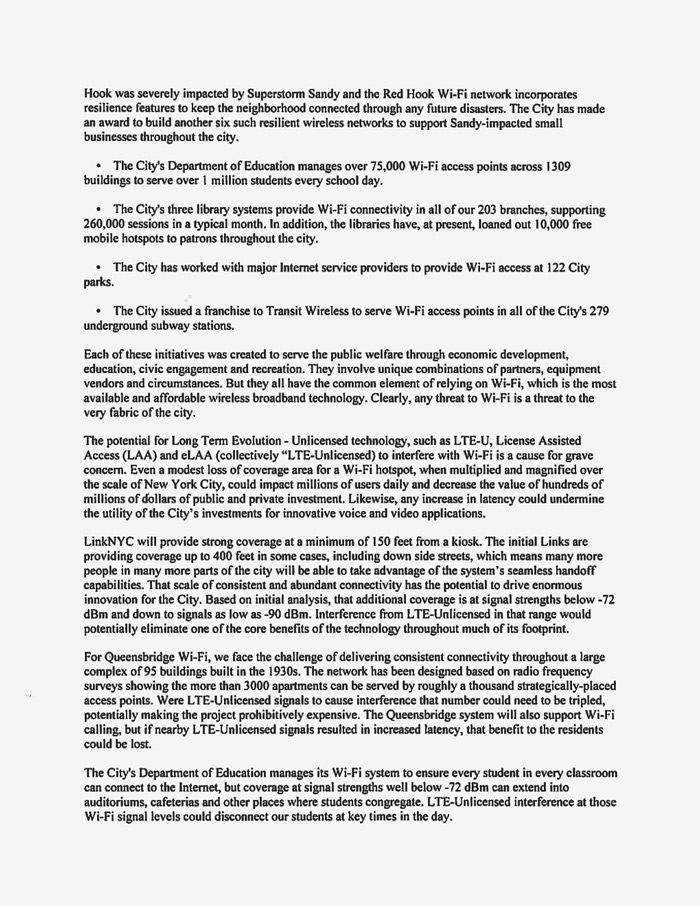 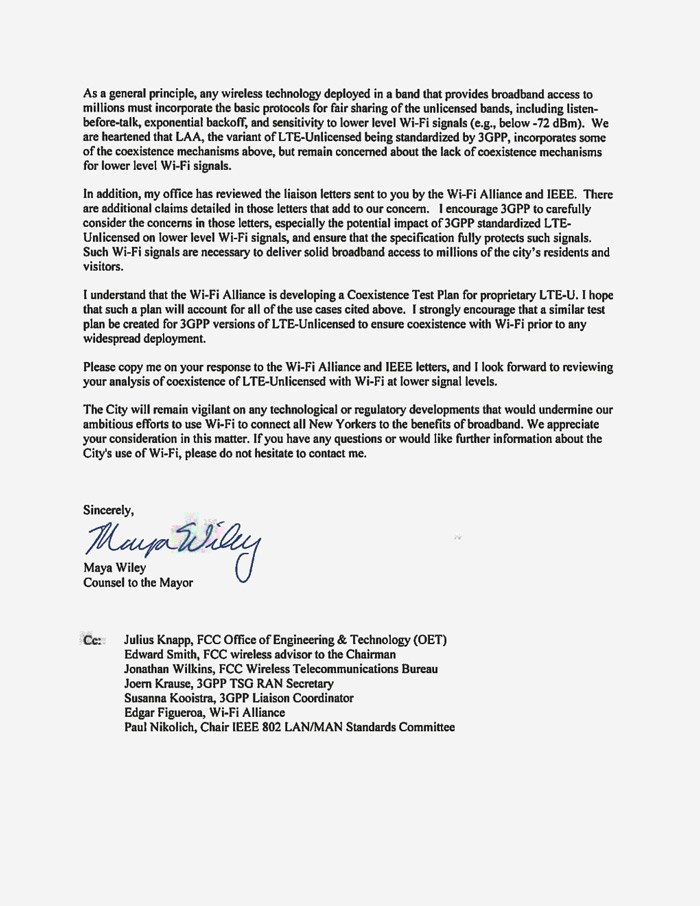 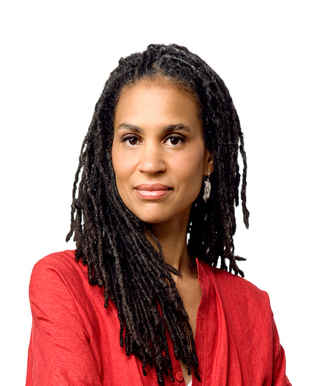 Maya Wiley could torpedo LAA"Coverage is at signal strengths below -72 dBm and down to signals as low as -90 dBm," New York City Counsel Maya Wiley tells the FCC and standards groups. We (I'm a New Yorker) are demanding that Verizon's LTE in WiFi spectrum not interfere with New York's plan to connect everyone, starting with 7,500 free gigabit Kiosks. Verizon's LTE proposal - now a subject of controversy in 3GPP - specifies that LTE-U will choose an unused channel if available. This data raises the question of "What is an unused channel?" I infer that lowering the detection threshold will probably be necessary.

Technology is moving fast; rules are changing slowly unless the change has a powerful patron. New York's petition has implications worth exploring.Harold Feld has pointed to changes in wireless rules that improve performance without undue interference. His ideas seem sensible to me. I'm presenting here the NYC claims and will be asking experts for opinions in a follow-up article.

"LinkNYC will provide strong coverage at a minimum of 150 feet from a kiosk. The initial links are providing coverage up to 400 feet in some cases, including down side streets, which means many more people in many more parts of the city will be able to take advantage of the system's seamless handoff facility. That scale of consistent and abundant connectivity has the potential to drive enormous innovation for the city. Based on initial analysis, that additional coverage is at signal strengths below -72 dBm and as low as -90 dBm.

Any wireless technology deployed in a band that provides broadband access o millions must incorporate the basic protocols for fair sharing … We remain concerned about the lack of coexistence mechanisms for lower level Wi-Fi signals. …

Ensure that the specification fully protects such signals.  Such Wi-Fi signals are necessary to deliver solid broadband access to millions of the city's residents and visitors. …

New York City is credible enough I'm comfortable reporting their point of view, especially as I found numerous examples of successful connections at low ratios. I don't know enough to evaluate how low the level should go. I'm reaching out to all the parties for more technical details, as well as some senior experts. Better information needed  I went ahead with this article because the issue is pressing at the FCC and 3GPP.