200 FDD Massive MIMO systems are on their way to True Thailand from Huawei. FDD has been in dozens of trials for two years, but this is the first announced deployment. British Telecom tells me their trial is going well; if that continues, they will deploy. This is important because most spectrum below 2300 MHz is FDD and currently carries most of the traffic. Tens of thousands of TDD Massive MIMO systems have shipped, most in the 2500 and 3500 MHz bands.

Huawei has tested the 32 antenna systems to 4.7 times the capacity of a two antenna system. T-Mobile expects actual performance in the field to be more likely 2-3X, especially to mobile phones. Ericsson's Kathy Egan in 2017 wrote me, "Capacity increase as compared to 2 transmit antennas is between 1,5x – 3x on average and 1,9x – 5x for cell edge." I don't believe they have announced substantial deployments, although several carriers are ready to go. Lund University notes line of sight performance is much better than NLOS.

To work its magic, MM needs accurate information of the channel state. TDD (Time Division Duplexing) in a single frequency band. FDD (Frequency Division Duplexing) uses separate frequencies for the upstream and downstream, which has been a problem. Tom Marzetta, who invented Massive MIMO, originally believed MM would not work in FDD bands. Since then, at least half a dozen solutions have been proposed.

Until we have more performance data from the field, all numbers are unproven.

Massive MIMO Performance—TDD Versus FDD: What Do Measurements Say?

Jose Flordelis, Student Member, IEEE, Fredrik Rusek, Member, IEEE, Fredrik Tufvesson, Fellow, IEEE, Erik G. Larsson, Fellow, IEEE, and Ove Edfors, Senior Member, IEEE Abstract—Downlink beamforming in Massive MIMO either relies on uplink pilot measurements—exploiting reciprocity and TDD operation, or on the use of a predetermined grid of beams with user equipments reporting their preferred beams, mostly in FDD operation. Massive MIMO in its originally conceived form uses the first strategy, with uplink pilots, whereas there is currently significant commercial interest in the second, grid-ofbeams. It has been analytically shown that in isotropic scattering (independent Rayleigh fading) the first approach outperforms the second. Nevertheless there remains controversy regarding their relative performance in practice. In this contribution, the performances of these two strategies are compared using measured channel data at 2.6 GHz

[Xi'an, China, June 26, 2018] During the Huawei User Group Meeting 2018, Huawei released the FDD LTE SPACE solution with over 20 carriers from all over the world. The SPACE solution enables the evolution of 5G era LTE networks by improving LTE coverage, capacity, user experience, and service innovation. LTE has become an All-Business-Connected Network for a full set of industries in the society. 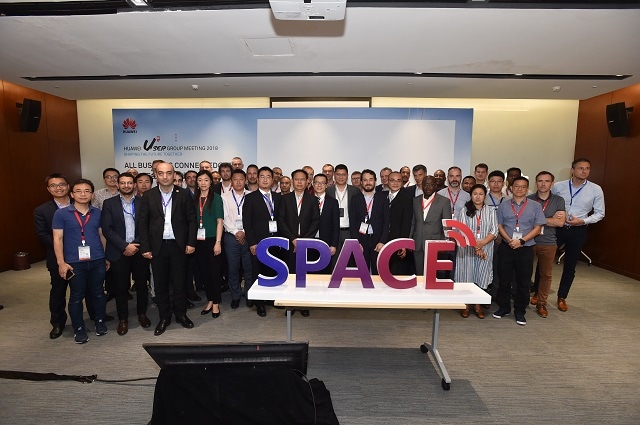 2G and 3G used to be the infrastructure networks for wireless communications with voice service as the core service. As consumer requirements diversified, data service has replaced voice as the core service. At the same time, as the concurrent networks of 2G, 3G, and 4G are complex and hard to maintain, operators hope to carry all services on one network. Operators around the world have centered their investment and maintenance resources on the LTE network. Some of them have begun to consider shutting down the existing 2G and 3G networks or retaining only a small amount of investment to maintain the 2G and 3G networks.

LTE has evolved from R8, R9, R10, LTE-Advanced, LTE-Advanced Pro to the current Release 15. The evolution will continue, in terms of capacity, peak experience, latency, and connectivity, enabling LTE to be an indispensable part of future networks.

According to GSMA, by 2018, LTE services are available in over 300 countries and regions around the globe. It is estimated that by 2021, 79% of the mobile data traffic will be carried on the LTE network. Over a decade's development, LTE has now become a well-proven technology, providing all services that the legacy 2G/3G networks can offer. It has a well-formed industry chain and sufficient chips and commercial terminals.

"It will be a future-proof trend to carry both data and voice services on the 5G-era LTE network. LTE will create a golden decade for operators' development."

S = Service. A better connected world is just around the corner. SPACE will continue to increase the connected fields, covering the whole process of new service roll-out from prototype incubation to business scale expansion. With cellular IoT technologies (enhanced NB-IoT and eMTC), a single cell is able to maintain a maximum of 50,000 connections. Coverage, power consumption, mobility, uplink data rates, capacity, and additional aspects will be further enhanced, allowing for more connections between people and things (and also between things and things) and exploration into a more diverse list of vertical industries. By using unique CPE and achieving a maximum of 5-time increase in spectrum efficiency by MIMO technology, site capacity will be increased by 10 times. WTTx suite enables precise provision and expansion on-demand, and helps operator quickly launch services. Now, WTTx is exploring the business like WTTe, WTTc, and WTTs. By optimizing mechanisms for latency-sensitive services and using terminal coordination, the average air interface latency of services is reduced to 50ms. By introducing Short TTI, the scheduling period for the air interface frames is further shortened, reducing the average air interface latency to 20 ms. Latency will become the third important user experience KPI after capacity and coverage. Shorter latency will greatly improve user experience of mobile games, red envelop grabbing, remote driving, LTE-V, and additional services, and support more low-latency services (such as remote control and V2X).

E = Evolution. Based on the SingleRAN Pro platform, SPACE provides a unified hardware platform to quickly and efficiently build 5G target networks that are backward compatible with 2G, 3G, and 4G networks, so as to maximize return on investment of operators' live networks. In addition, it supports flexible network architecture in non-standalone (NSA) networking. Flexible spectrum sharing between LTE and 5G new radio (NR) maximizes resource efficiency and ensures excellent service experience in the 5G era.

According to Huawei's evaluation, after the SPACE solution is deployed, LTE can achieve a speed of 50 Mbps anytime anywhere, air interface latency of as low as 20 ms, and a maximum of 50,000 connections per cell. The LTE network capability can meet the requirements of over 80% services and is therefore qualified for an All-Business-Connected network.