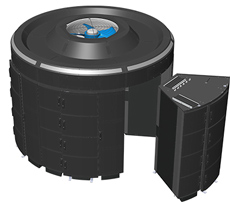 1 ms 5G is years away but the first 10-15 ms Edge Clouds are sprouting up. A day after I said, "No one is deploying Edge at the cell sites," I discovered Vapor IO is deploying systems one hop away or sometimes at towers. Update: Vapor tells Mike Dano "Vapor IO is putting its edge computing functions," where they can "manage hundreds or potentially thousands of cell radios." Previously, they planned the opposite. At a guess, the difference is 3-8 ms. Apologies for my sloppy fact-checking. End update.

The first two are live in Chicago and they building over a dozen more. After four years and three funding rounds, they plan to launch 200 sites by the end of 2020. Goldman Sachs, Crown Castle, and private equity have been involved.

AT&T and T-Mobile/Nokia are rebuilding their networks for SDN/NFV and both are using OpenStack. Vapor IO has an interesting multitenant software system that provides a shared system (colocation.) CMO Matt Trifiro tells me they are actively signing clients. Part-owner Crown Castle has 10's of thousands of small cell and towers. It would be natural to do joint sales calls.

Trifiro tells me the Vapor Edge Modules will also go at "aggregation points" one hop away. With dedicated fibre, that may add as little as a millisecond.  (Update. This is not accurate,)

The telcos have been giving conflicting impressions. Hans Vestberg of Verizon twice sounded enthusiastic about building an Edge on the Q4 financial call. Andre Fuetsch of AT&T has discussed deploying OpenStack routers at "thousands" of sites.

All the carriers are interested in building Edge Clouds but few are certain of the market.

Vapor IO’s Kinetic Edge is a new kind of infrastructure architecture that uses software and high-speed connectivity to combine multiple micro data center facilities into a single “logical data center.” For developers and operators, it presents a geographically-dispersed collection of micro data centers as a single virtual facility with multiple availability zones.

“We are deploying Kinetic Edge right now,” said Crawford. “We start by placing multiple Vapor edge data centers in a geographic region, spaced 15 to 20 Km apart. We then connect them with high speed fiber so that our industry-redefining software can stitch these sites together into a highly-reliable and customizable edge presence that can span an entire city or region.”

An Architecture Built for Edge

A Kinetic Edge consists of:

Traditional data centers are made more resilient by expensively replicating critical systems at each site. For example, a 2N+1 site would require three of everything—generators, backup batteries, cabling, cooling systems, and so on. A Kinetic Edge installation with no redundancy at individual sites can seamlessly combine sites to exceed the availability of the most reliable Tier 4 data centers. A Kinetic Edge with five sites can offer twelve nines of availability (99.9999999999% uptime), without the costs of replicating critical infrastructure at each site. This level of reliability is achieved by distributing risk across all sites in the Kinetic Edge and using software to monitor environmental conditions and replicate workloads and data so that there is no single point of failure.

The Vapor Edge Module (VEM)  is a completely self-contained, containerized edge data center that is factory-assembled and delivered as a single unit. It is designed to enable weather-hardened, multi-tenant edge locations where the economics of shared infrastructure creates a long-term value proposition. Built around the highly efficient Vapor Chamber design, each VEM supports up to 150 Kw of IT load in a small, efficient footprint. The prefabricated design incorporates all of the critical data center systems, including power distribution, cooling, fire suppression, security, and racking systems for IT equipment. Additionally, the VEM supports an adaptive ‘blindmate’ cooling plant that allows for chilled water, direct expansion, or adiabatic cooling depending on the given location and climate.

In multi-tenant and colocation environments, service personnel from different organizations require access to their equipment (and only their equipment). The VEM completely isolates all IT equipment behind a physical and electronic security wall. Service personnel enter a small access alcove, via biometric and/or other security authentication mechanisms, and are only allowed direct access to their hardware. The IT equipment resides inside a Vapor Chamber that rests on a motorized turntable which can rotate 180 degrees in each direction in order to present the authenticated rack to the service access alcove. This both increases security and reduces the amount of space needed for housing and servicing the equipment. Each rack can be further secured by up to four 9-12 RU locking doors, which also require security authentication to open, and allow tenants to lease capacity in partial rack increments.

Vapor IO software continuously monitors the critical environment and makes automatic adjustments based on actual IT load, providing for greater efficiency.  It can additionally issue warnings based on the status of sensors integrated into the VEM. The software also supports remote operations and security via an API built atop OpenDCRE. A human-friendly web-based application for operators connects directly to the Vapor Edge Module, making it easy to monitor multiple locations, create dashboards and reports, and perform enhanced remote hands operations.

Built for the edge

Vapor Edge Modules are easy to deploy, compact, cost effective and highly secure. Factory-assembled for direct delivery to edge locations, each VEM arrives as a single unit that can be placed directly on a concrete slab or piers. A fully-operational VEM can be installed at an edge site quickly—in timeframes measured in minutes, not months. Because security, remote operations and multi-tenant capabilities come standard, the Vapor Edge Module will appeal to landowners, building owners, infrastructure providers and other entities looking to build out an edge presence quickly.

Over 100 edge locations planned by 2020; Vapor IO on track to be the largest provider of interconnected edge data center facilities, coast-to-coast

The Kinetic Edge platform offers a new category of colocation built around infrastructure-side edge computing at the intersection of the wireless and wireline networks. By deploying micro data centers at the base of cell towers and in nearby wireless aggregation hubs, Vapor IO expects to be the largest provider of edge data center colocation services integrated directly into the wireless infrastructure.

“As the concept of edge computing has gone from niche technology to mainstream trend, we have methodically laid the foundation for infrastructure-side edge computing,” said Cole Crawford, founder and CEO of Vapor IO. “Vapor IO is building the largest footprint of interconnected edge data centers and we are rolling out at an accelerated pace. We’re thrilled to welcome Berkshire Partners as a lead investor and to have the continued support of Crown Castle. This will help establish Vapor IO’s leadership in the market and offer unprecedented value and performance to our customers.”

“Vapor IO is a leader in edge computing,” said Beth Hoffman, a managing director at Berkshire Partners. “With premier technology, increasing mobile edge demand and a large market opportunity, Vapor IO is poised for impressive growth. We look forward to partnering with the company’s exceptional management team to deliver scalable mobile edge infrastructure and to having the opportunity to work alongside Crown Castle again.”

Colocation on the Kinetic Edge
Vapor IO’s primary offering will be providing Kinetic Edge product bundles that include:

Rollout Plans
Vapor IO has deployed multiple Kinetic Edge data centers in Chicago, IL with plans to have 13 sites underway by the end of 2018, nearly 50 by the end of 2019 and over 100 by the end of 2020, providing coast-to-coast coverage. Specific cities and more detailed rollout plans will be announced later this year.

“The exponential growth in mobile data and the development of new applications that require high speed data networks with low latency make this an exciting time to be in the shared communications infrastructure business,” said Phil Kelley, senior vice president of Corporate Development and Strategy for Crown Castle. “Vapor IO is a leader in edge computing and their solution provides edge colocation with the most dense compute per square foot, which optimizes the use of the valuable land under our towers. When you combine our distributed real estate and high capacity fiber connectivity with Vapor IO’s capabilities, Crown Castle is uniquely positioned to enable edge computing.”

Austin, Texas – March 02, 2018 – Vapor IO,the leader in edge computing and edge data centers,and BasX Solutions, one of the world’s leading authorities on data center cooling, today announced a revolutionary new cooling system specifically designed for challenging edge environments. By integrating BasX’s patent-pending hyperscale-grade cooling system with Vapor IO’s Vapor Edge Module (VEM), the companies are able to deliver the smallest footprint multi-tenant micro data center with more than 150 kW of critical IT load in edge environments. The solution provides all the benefits of free and economized cooling, which is today’s gold standard, with none of the drawbacks associated with outside air economization or evaporative water consumption. The first Vapor Edge Modules will be deployed as part of Vapor IO’s Project Volutus in the third quarter of 2018. Vapor IO expects to start deploying at scale by Q4 2018.

“BasX has specially-adapted their hyperscale cooling technology to the Vapor Edge Module, reconfiguring it for a small footprint and remote operation in rugged edge locations,” said Cole Crawford, founder and CEO of Vapor IO. “BasX’s unmatched manufacturing and design expertise—as well as their cooling technology—make them the perfect partner for manufacturing our Edge Module, helping us accelerate the next-generation internet via Project Volutus.”

Delivering Free Cooling to Even the Most Rugged Edge Environments

“Each and every data center space has its own challenges in regards to space constraints, cooling density, and many other factors. In order to deliver the Vapor Edge Module, we had to uniquely configure our cooling system to perform in that compact space and create safe and exact air handling conditions in frequently rugged conditions,” said BasX president and co-founder Matt Tobolski PhD, SE. “The Vapor Chamber’s patented airflow system inside the Vapor Edge Module is a great match for BasX’s cooling technology, making it possible for us to jointly deliver a high-performance multi-tenant edge data center. We also found the capabilities of Vapor’s software-based telemetry systems ideal for analyzing, tuning and remotely operating edge data centers to ensure we are able to accurately track cooling system performance.”

The Vapor Edge Module will deliver the most reliable and efficient data center thermal management to the edge—all without the use of outside air or water. Benefits include: