The gap will increase rapidly, with the US passing well over 10 million homes/year. England, Italy, and Germany are accelerating fiber builds. People often take years to switch. Most homes passed with fiber the last few years have yet to convert.

Consumers choose fiber, even when cable is a perfectly good alternative.

Politicians like it; almost all the pols in the US & Germany demand fiber. Telcos like it, especially when the politicians pay as much as $80,000/home for it. It's low maintenance. Fiber backhauls & fronthauls wireless, and is an attractive offering for business.

DSL has been declining since 2014 and has 50 million fewer connections. England and Germany tried to stick with DSL but BT, DT, and more than a dozen independents are now building as rapidly as they can. This hurts; I've been "The DSL Guy" for two decades but the data is clear.

Cable as I write is typically 900 downstream and 10-20 Mbps upstream (35 shared.) Cable can be upgraded very cheaply with DOCSIS 3.1 equipment just now getting to the field. Cable at 300 Mbps down and 100 Mbps up is plenty for years in 95% of homes that don't share large files. Improving cable is far cheaper than running new fiber but customers aren't buying it.  Comcast and Charter both lost customers last quarter. 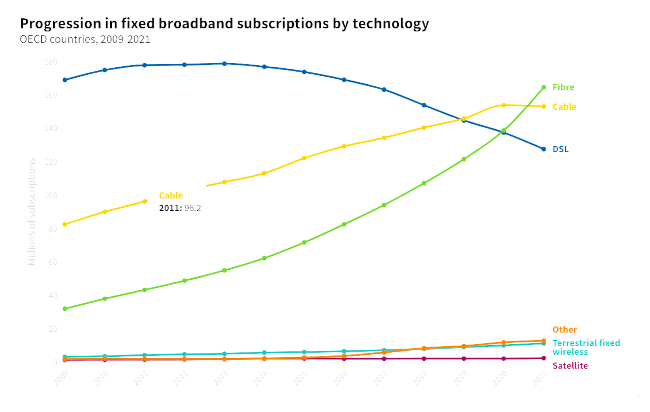 Fixed wireless started to explode in 2022, but that's another story.

Here is the OECD release

High-speed fibre internet has for the first time overtaken cable to become the primary fixed broadband technology across the OECD’s 38 member countries with 34.9% of fixed broadband subscriptions, according to the latest data.

The latest update of the OECD broadband portal shows that fibre subscriptions increased by 18.6% over the year to December 2021 to move ahead of cable, now at 32.4% of fixed broadband subscriptions, and DSL at 27% and declining. This is good news for the delivery of data-intense services and applications, given the symmetrical capacity that fibre offers. The biggest growth was in Costa Rica, Israel, Greece and Belgium which all increased fibre connections by more than 80% in 2021. The share of fibre in total broadband is now at 50% or above in 13 OECD countries, standing above 50% in Chile, Finland, Luxembourg, New Zealand, Norway, and Portugal, and above 70% in Iceland, Japan, Korea, Latvia, Lithuania, Spain and Sweden.\

Mobile data usage per subscription rose by 15% in 2021, less than in 2020, but still making a rise of 79% over the three years to end-2021. The amount of data consumed averages 8.4 GB per OECD subscription per month but varies greatly by country. Finland leads the way with 36.7 GB per month per subscription, followed by Latvia (29.7 GB) and Austria (26.4 GB) while monthly averages in Mexico and the Slovak Republic are just below 4 GB.

Iceland is by far the leader in machine-to-machine (M2M) communications with 317 M2M SIM cards per 100 inhabitants. The high number is driven by Vodafone Iceland’s provision of M2M subscriptions to help international pharmaceutical companies distribute COVID-19 vaccines. Sweden, Austria, Norway, and Germany also rank highly in terms of M2M SIM cards per head. Sweden’s 191 M2M SIM cards per 100 inhabitants is boosted by the use of these SIM cards in other countries by a Swedish operator. Overall, M2M/integrated mobile cellular subscriptions have increased by more than 16% (58 million new subscriptions) over the past year in the countries for which data were available.