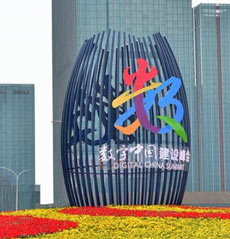 “It is the compelling obligation for big companies to compete in core technology,” insists Jack Ma of Alibaba, market cap $451B, at the first Digital China Summit in Fuzhou. $457B Tencent chairman Pony Ma said "it is urgent for Chinese enterprises to make breakthroughs in the ownership of core technology." Baidu, probably world #2 in Artificial Intelligence, takes the market cap to $1T.

China has the talent and the funding.

I just met Benjamin Koo of Tsinghua. He came to the U.S. to get a Ph.D. from MIT, worked here a few years, and now has returned to China. A slew of Bell Labs veterans are now working in the Middle Kingdom.

China has budgeted $100B just for memory chips.  The state-backed National Integrated Circuit Investment Fund just raised $32B. Shanghai has pledged $7.5B.

In wireless standards, nothing goes through 3GPP without the approval of the Chinese. IEEE 802.11, which makes Wi-Fi standards, has a very strong Chinese presence. The ITU standards are dominated by C-J-K: China, Japan, Korea.

The ZTE decision was an historic mistake, inspiring China to move even faster.