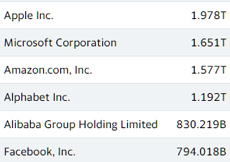 Google is using its 95% browser share to try to dominate the payment market in India. Amazon is cross-subsidizing e-commerce with billions from the incredibly profitable Amazon cloud, AWS. Apple is ripping off everyone with the unreasonable 30% takeoff of everything in the Apple store.

All five companies first grew because they do what they do incredibly well. But their size allows them to dominate in so many ways.

Think about this. Would the world be a better place with ordinary corporate giants or these leviathans?

I haven't translate euros and pounds into dollars. Jio and Japan Telecom figures are buried in the numbers of their parent companies. That would add $150-200 billion to the total..