It won't be right for most people, but the French $5 1 gigabyte plan would meet my needs. I don't do much video on the go. I spend most of the time at my house or Jennie's and have robust Wi-Fi.

Away from home, I mostly use my mobile for looking up bus schedules, checking my email, or similar. None of that requires much bandwidth. I can keep my use below the gig and would be able to save money.

100 gigabytes costs €20. As the cost to deliver wireless keeps falling, we'll see more plans like this. 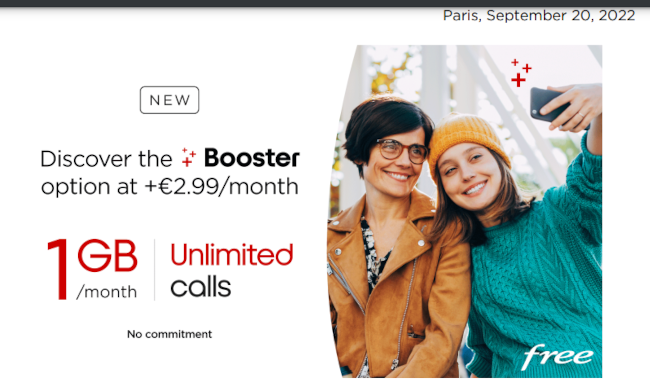 Free’s subscribers on the €2 Mobile plan (€0/month for Freebox subscribers) now
have the option to add unlimited calls and increase their data to 1GB for an extra
€2.99 a month, with no commitment. The basic price of their mobile plan remains
the same and it’s still with no commitment.
This new option is sure to be extremely popular, particularly for parents of teenagers
looking for a plan with lots of calls and more data at a very attractive price.
It’s available online as of today, on the mobile.free.fr website for new subscribers and
via their Subscriber Space for existing subscribers.
The Free €2 plan (€0/month for Freebox subscribers) with the 1GB Booster option
(for an extra €2.99/month) includes:
• Unlimited calls in Metropolitan France and to the French overseas
départements (DOM, apart from Mayotte) instead of 2 hours per month
• Unlimited texts and MMS in Metropolitan France and unlimited texts to the
DOM
• 1GB of data per month in Metropolitan France (€0.05/MB if exceeded)
instead of 50MB per month
• In Europe and the DOM: 1GB of data per month (€0.05/MB if exceeded) and
unlimited calls