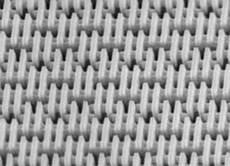 Kevin O'Buckley of Marvell tells EE Times, “We’ve been able to achieve on average 40 percent lower power for a given design point and performance point. We’ve been able to achieve 40 percent greater integration, mostly measured as die area shrink, which can be used either to pack in more performance in a given die area or in some cases, lower costs.” Marvell finds, "TSMC’s 5nm technology which delivers approximately 20 percent faster speed or 40 percent power reduction compared to the previous 7nm generation."

Moore's Law is slowing down, but how much? Far too many claims are made based on inappropriate comparisons. O'Buckley answered me, "40% lower power was by taking some key designs in N7 and moving them to N5 at fixed performance (and lower voltage.)" (There is an immediate process, TSMC's N7+, which uses EUV.)

5G in China now has about 100 million subscribers but the results in the West have been dismal. T-Mobile is bringing lower-priced phones to the U.S. while upgrading ~3,000 towers per month. On the lightly loaded network, speeds average over 300 Mbps. A promotion drives the cost down to $200.

1/3rd of the U.S. will be covered with mid-band 5G yearend, and They won't stop. TMO has passed AT&T to become #2 in the U.S. and is going after Verizon. For at least a year and possibly two or three, TMO will have a much better network.

Both Verizon and AT&T have been cutting capex and praying consumers won't care that most of their "5G" is slower than decent 4G. Verizon's mmWave Ultra is the fastest network in the world, but 5G customers connect to it less than 1% of the time. 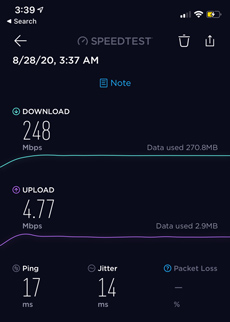 A. sent this speedtest from his 5G home router in Riyadh. 248 Mbps down, 5 Mbps up, and a remarkable ping of 17 ms. Opensignal average 5G speeds in Saudi Arabia test at 414 Mbps, highest in the world. See 5G Worldwide: Saudi first, USA last. His note:

"I have been a subscriber of 5G for my home internet with Zain KSA since last January. At the beginning, the internet was extremely slow (actually lower than 4G). However, the internet has been gradually improving lately I suspect that is related to the higher deployment of 5G small cells around my areas."

The low ping is surprising, lower than Verizon and almost all 5G worldwide tests. It implies that Zain has a new, state-of-the-art system for backhaul and core transport. While the headlines go to the latency of the 5G radio, the backhaul often has a larger effect. Verizon One Fiber has more impact on latency than anything related to 5G.

The Gulf and Korea have gone faster to 5G than any others.

Opensignal released the first international comparison of 5G speeds. I was startled to discover that Saudi Arabia is far ahead in both coverage and speed. I did a little research and discovered that SA, along with the Gulf countries, is further along than anyone in Europe.

The average 5G speed in SA was 414 Mbps, In the USA, it was 51 Mbps, slower than 4G in Canada and most major US cities. Most U.S. connections were low-band, which by its nature tends to be slower than 4G.

Saudi Telecom has upgraded 3,000 of its 7,000 towers. Zain claims it has even wider 5G coverage than STC. Opensignal found that Saudis connected to 5G 34% of the time, leading the world. Kuwait was second, at 29%. It doesn't have data yet for the UAS or Qatar, but I know both also have relatively good coverage.

Korea was second, at 312 Mbps. That's less than half the figure of the Korean government, but much closer to results in other countries using similar spectrum to the Koreans. See Korea's very high speed claims. The Koreans have over 7 million 5G subscribers, 2nd or 3rd in the world.

Frankfurt DE-CIX has long been the busiest Internet exchange, but Sao Paulo is the first to reach 10 terabits of traffic. I shouldn't have been surprised. 2/3rds of the Internet is in the global South. Brazil is building fiber faster than the U.S. (So are France and Spain. The U.S. fiber record is dismal, perhaps because gigabit cable reaches ~90% of the country.)

In Frankfurt, traffic is down from the April-May COVID peak. (Chart below.) Traffic in March peaked around 8 terabits, then went up to 9 in May. August peaks were down to about 8.5 terabits, about where they would be with normal traffic growth since 2019.

Scare stories and cheap headlines spread panic, but actually nearly all networks in the developed world handled the traffic without major problems. Cable upstream occasionally hit minor congestion. The cable companies have been holding back on upstream improvements for 5 years, expecting Full Duplex to cheaply raise upstream bandwidth around now. The technology is barely out of the labs, however, and the costs are higher than expected. 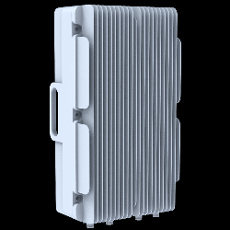 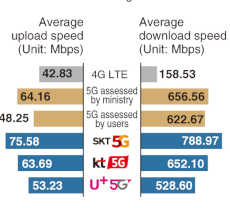