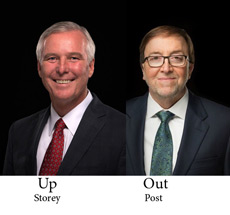 Just a few months ago, Century wrote, "Glen F. Post III will remain CEO until Jan. 1, 2019; then expected to become executive chairman." Century stock has lost one-third of its value over the last nine months, so Storey probably had little trouble convincing the board to make the move early. They also blocked Post from the promised chairmanship.

In a parting shot, the official photos have Storey looking sleek and Post badly in need of a shave.

Century has a goal of 40 megabits to most by 2020. That's probably "up to 40 megabits" and actually less. Their fiber and G.fast plans, modest already, have been cut. They simply aren't competitive with cable, which by 2020 will have a gigabit to 90%. 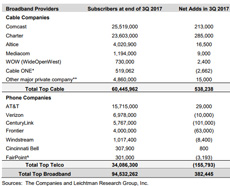 2,095K adds to 95,056K. Over 100,000,000 including smaller companies. No surprises here. DSL - especially lines not upgraded - continues to be clobbered. Most U.S. cable is 100 megabits or more. Almost half the cable homes are offered a gigabit. In my Manhattan building, Verizon doesn't offer more than 3 megabits.

AT&T is apparently the anomaly here, adding 114K while the other telcos fell. However, without the 3M fiber homes and the joint marketing with DirecTV, they too would be negative.

Century, Frontier, and Windstream lost between 5% & 10% of their broadband lines. They've starved the network in order to keep the dividend high and eventually it caught up to them. Leaders at all three have been promising investors they would turn around the 600,000 lines lost in 2017. Given the inferior networks, I believe they are lying to themselves.

80% coverage at Comcast leads the way

About 40M will be able to get 1 gigabit symmetric from the telcos. Verizon has essentially frozen at around 15M, which AT&T intends to match by 2020. Millions more are fibered at smaller companies.

The upstream for most cable will be 5-20 megabits, with a few able to receive 50 megabits. Higher cable upstreams will mostly wait until 2020 or later. John Chapman of Cisco tells me full duplex DOCSIS will yield hundreds of megabits upstream initially and gigabits eventually. He expects first units in 2019 and volume in 2020.

One month decline amidst competition may be a statistical artifact. Update: 500K adds in Jan 2018

In December 2017, China Unicom fell from 77,503M to 76,539 broadband customers. That's still the third highest in the world, three times as much as Comcast.

China has > 800M LTE subscriptions, with many of the 200M 3G customers soon to migrate. LTE speeds are often 50-150 megabits. It's inevitable that some people will go wireless only; 5M have chosen wireless for convenience in Japan even though fiber was available. But China Mobile and China Telecom continue to grow rapidly. 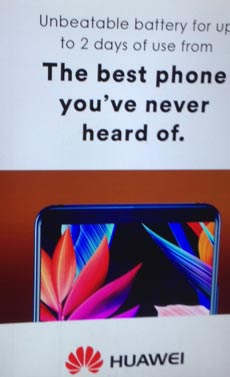 Chinese social media is calling for a boycott of Apple in return.

The AT&T phone cancellation is just the latest unproven security accusation. A decade ago, I brought Huawei in to bid in a modest mobile network I was consulting on. We needed a better price for microwave backhaul gear; to get into the account Huawei came in about 30% lower for comparable equipment. Then the call came in to the company President from a Senator's aide. "Don't buy from Huawei," he said, and reminded the CEO how dependent the company was on government funding. There was no choice.

Since then, Huawei has been allowed to sell phones in the U.S. but not major networking equipment. It's somewhere between very difficult and impossible to use the phones covertly. There are dozens of Huawei phones and other products available at Amazon or Best Buy. Google phones are made by Huawei. There were no security issues raised, until Huawei committed to spending $100M on advertising to back up a large contract with AT&T. The ad at left is from the NY subway. 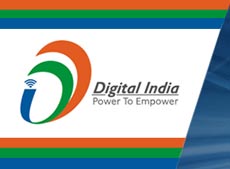 After years of delay, >100M Indians are ready to be connected with fiber, Wi-Fi, and LTE.

Phase 1 is finished of India's BharatNet, the most ambitious rural connectivity program in history. The expectation is all 250,000 regional councils and 625,000 villages will be reached by GPON fiber. Minister Manoj Sinha is optimistic they will beat the March 2019 completion target.

Most villages will have local Wi-Fi, sometimes from the local Post Office and often through a program of local businesses. Fiber backhaul is being provided inexpensively to the Indian telcos, who are installing LTE. Reliance Jio, already reaching over 80% of Indians, will presumably use BharatNet backhaul as they extend their LTE network to 95% of Indians.

Goldman Sachs took a $5B writeoff this morning for the new tax law and Bloomberg expects $20B more from Citi. Verizon and AT&T have some of the same issues so may see similar. Do not believe U.S. earnings results in the next year or two because balance sheet adjustments may overwhelm underlying trends. Underneath it all, all these companies are extremely profitable and the tax changes will put them ahead. But the numbers the next 24 months could be highly misleading.

Verizon has $46B in "deferred long term liabilities" and $38B in poorly defined "other liabilities." Major adjustments - up or down - would surprise no one. Phil Cusick of Morgan did an analysis a while back from which I inferred Verizon would need writedowns. Since he hadn't said that explicitly, he got angry at me and cut me off his distro. (I'd like to be back. His analysis then and other times was on target.) I haven't trusted Verizon's financials for a decade because of unclear items like these liabilities and enormous goodwill. Former CFO Stephenson at AT&T has long been a wizard at delivering the numbers he wants to.

Suggestion: If you are putting money into this industry, closely follow analysis from John Hodulik and Craig Moffett. They are among the best at finding reality beneath the figures reported.

"A Brain Drain & An Empty Shell," If Broadcom Buys Qualcomm 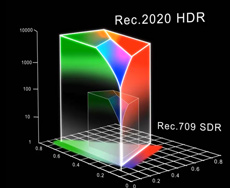 Will they ever again produce a chip like the new Snapdragon 845? The 835 is the best mobile chip in the world, dominating the market in top end smartphones. The newly announced 845, due in June, is reported to be 25%-30% faster. It will be produced on the same 10 nm process at TSMC. The 845 is "A significant upgrade — to get 25-30 percent performance in the same general process node is huge," analyst Jim McGregor tells Rick Merritt in EE Times. It's designed for speeds into the gigabits and ultra HD.

Jon Peddie's comment in the headline probably goes too far, but the cutbacks at Broadcom foretell problems ahead.