Digital Kenya: A book about an extraordinary community.

“This is not your usual run-of-the-mill entrepreneurial business book. The authors are going after nothing short of a transformation in the African business environment, specifically in Kenya. Kenyans, along with many of their fellow Africans, have leapfrogged into the modern, smartphone world without passing through the historical wire-line telephone stage.

But this book is not just about mobiles. In fact, it is mostly not about mobile technology. It is primarily about fostering innovation, harnessing talent, gathering capital, finding or defining markets, and asking the right questions.

The book gives very concrete examples of what has been done and how it was done. Their pragmatic examples provide essential guideposts for fulfilling the promise of African innovation.”

Kenya and the very thoughtful Dr. Ndemo have nurtured a remarkable class of businessmen. The download of the book is free, 150,000 have taken copies.

Nokia gets EUR 250M from govs to lend to AT&T

Some U.S. regional telcos, two of which are now threatened with bankruptcy, gloated to Wall Street about how much broadband subsidies were diverted to company profits. So when I saw the release that Nokia was getting government money for "research," I wondered how the Nordic Investment Bank could be assured the money would go to "increased research" rather than other corporate purposes. Government loans are usually at a very favourable rate and much sought after. Money is fungible and can be easily diverted.

The headline is one possibility of what Nokia could do with the money unless the rules are strict. It was also my way to remind readers that Nokia is doing a great deal of vendor financing as well as receiving hundreds of millions or more in government support. Korea is loaning US$billions to customers of Samsung.

Huawei and ZTE are not the only ones getting government money.

BT & others fight back against the China boycott

Update Dec 17 Two weeks ago, BT was fighting back against the Huawei boycott. The Security Forces have since grown stronger. The cost to Britain will be in the US$billions.

The U.S. security agencies are currently pressing England and Germany to cut off Huawei, which everyone in the industry believes would be a very expensive move.  BT is smart enough not to take on MI5 and GCHQ directly, but would have to spend many billions more if it lost Huawei and ZTE as suppliers. Update 11/28 New Zealand, one of the Five Eyes working together since World War II, has now cut Huawei out of the 5G plans.

"There is only one true 5G supplier right now and that is Huawei -- the others need to catch up," says BT Chief Architect Neil McRae. That comment makes it easy to draw the inference that cutting off Huawei would significantly slow down England's 5G deployment. Even if BT says nothing, others can and probably will assert that it would be a mistake for England to boycott the Chinese.

Not really everywhere and not always a gigabit, but the worldwide trend is amazing. 22 networks around the world offer Gigabit LTE (peak) 979 megabit downloads, per the GSA findings below. 25 more are likely to reach that speed as they refarm spectrum. Peak speeds are measured in the laboratory. Average speeds are usually 50-70% slower, less at the cell edge or inside many buildings. I think of Gig LTE, as well as the variation mid-band 5G NR, as 100-400 megabits. In the field, 500-800 megabits are occasionally measured on lightly loaded networks.

80% of U.S. cable homes - including mine - can order a gigabit downstream. I took the headline from Alison Diana, who reported CableLabs' figure of gigabit of 63% of the U.S. in June, growing by 7% per month.

Calix AXOS: "It's delivered, it's working, it's deploying."

Verizon's Lee Hicks is bringing Calix's ambitious new operating system into active deployment, a decision that would only be made after a careful review. Clayton Nash of CityFibre has adopted AXOS for a fully-funded fibre build to 5 million Brits. I will be skeptical until we have more results from the field, but if Calix's AXOS delivers as promised, it will be interesting to nearly every carrier on the planet - telco and cable.

AXOS is a fully developed software defined network system based on best practices. Native YANG models, full abstraction and encapsulation, virtualization ... all the buzzwords. It's designed to rapidly integrate new software and equipment. For example, software house Infosys has tailored its subscriber management system with AXOS. It's running on the new E9-2.

Calix also can offer the system completely as software. It will run on other company's hardware. They welcome other gear, from white box to sophisticated systems. 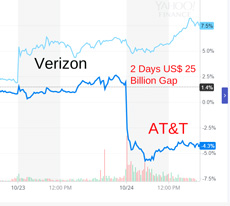 Verizon wireless pulled up earnings, AT&T media held back profits. Both cut back capital spending, once more proving the "High cost of 5G" is a myth. Meanwhile, the prices of wireless service in the U.S. are going up as competition weakens.

The stock market response was extreme. By the end of the day, AT&T was down 8%, about US$20 billion. During the last year, Verizon is up 17% and AT&T down 13%. The difference is about US$60 billion. AT&T clearly overpaid for DirecTV & TimeWarner, given the realities of the business, but I wouldn't estimate US$60 billion.

Craig Moffett's take is that AT&T (and Sprint) are in thrall to the bondholders while Verizon and T-Mobile are delivering growth because that's what the stock market demands. His analysis today was devastating, including speculation T might have to cut the dividend for the first time in 30 years. "AT&T is prioritizing margins and cash flow over revenue and subscriber growth. ...Virtually every single part of legacy AT&T is shrinking. There are holes in every part of the story."

20% of Britain getting fibre from Goldman Sachs supported CityFibre 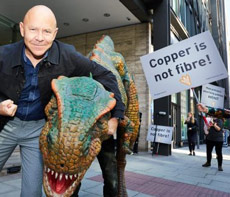 People are buying speed, so CityFibre could win enough customers to decimate British Telecom. CEO Greg Mesch was a pioneer at Versatel and finance guy James Enck is one of the most creative in the business. I wouldn't bet against these guys. Vodafone is the anchor tenant, which should give them enough scale to be in the game.

They are budgeting US$3.2 billion for 5 million homes passed, $600-700/home. That's higher than the actual cost at Telefonica, but Spain has far more apartment buildings than England. It's about half of what Deutsche Telekom is telling its regulator; I refuse to believe DT's engineers are that incompetent. The network is currently GPON. My opinion piece, GPON is Dead! Long live 10G. From Poland to Hong Kong, the low price of 10G is inspiring the switch, made be a little early.

Fibre to the home has been exploding worldwide, surprising industry experts. I missed it as well: I was amazed when researching Fibre is on fire again for clients of  STL Partners. Telefonica and Orange have each passed over 20 million homes. 20% per year growth rates are common.

Telus CEO Entwistle explains, "We see churn rates on fibre that are 25% lower than copper. And that's encouraging, 35% lower in HSIA and 15% lower on TV, 25% lower on average. We're seeing a reduction in repair volumes to the tune of 40%. We're seeing a nice improvement in revenue per home of close to 10%."

Their network costs should be > 50% lower than British Telecom. Any well-designed new network is half as expensive as the current telco networks. Lee Hicks at Verizon is ripping out 200,000 pieces of equipment left over from the many networks Verizon once had. (Phone, wireless, broadband, business, etc.) His One Verizon plan will replace all of them with a single IP network with only about 20,000 boxes.

J., a brilliant and successful Internet entrepreneur, was shocked when I told him what was happening around the world. He wanted to know more about changes that matter to his companies. I created a presentation.